Well, it was a mad dash day of packing, printing business cards, and getting to the airport. I kissed my beautiful girlfriend goodbye and began the torturous endeavor known as modern air travel. Denver to LA wasn't bad, it was when me and the other four classmates that I was traveling with got to the Air China ticket desk at LAX. 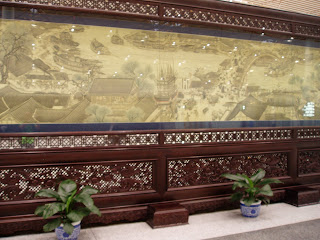 It was at this point that we learned of the difficulty in translating the e-tickets we had purchased through an American travel agent with the paper tickets that Air China still seems to be using. It was here that I noted my first surprise - not that the process was much more chaotic than the United ticket desk I had been at only hours before - but what they told us was a small problem took close to an hour to resolve. During that time I noticed something interesting as I was watching one of the ticket agents with our itineraries (just having our confirmation number wasn't enough). I noticed a man hand the ticket agent a stack of dollars, which the agent immediately placed in his jacket pocket. The agent then filled out a paper ticket for the man, wrote $110 on the boarding pass, and handed it to the man.

It just seemed so sketchy at the time as there was no cash register; no printed receipt; just a wad of bills in the agent's pocket. Something tells me I'll me seeing more of this type of behavior over the next two weeks.

Fortunately the flight was smooth and without any difficulties. Aside from spending 12 hours in a plane, it really wasn't bad at all. We arrived at the new China airport and were instantly amazed at the size of it. Here are some photos: 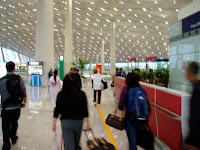 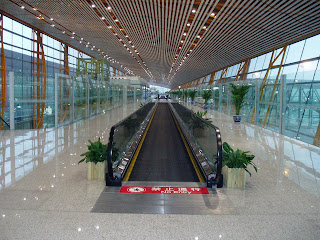