Image via WikipediaWell, my first day in China has been a very full one. My friends and I arrived at Beijing's new international airport around 6am in the morning after a very long flight. It was amazingly easy getting through the border, getting our bags and then going through customs.

Our first difficulty of the day though was when we got to get taxis to our hotel. Since there's five of us, there was this middle-aged guy from Los Angeles that asked if we wanted to share a cab into town. Thinking that this would be a good way to save on the fare I agreed to ride with him while the others got into two other cabs. I think I would have preferred not to ride with this guy. An obnoxious kind of creep, he got upset with the cab driver for not understanding English as he tried to explain that he was going to a different hotel and trying to make sure that the driver understood where it was. Even though the cab drivers charged us far more than normal for the ride (170RMB per cab), I would have been okay paying that alone to not have to had dealt with this guy (who also argued vehemently about his half of the price). 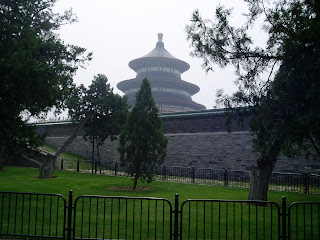 Anyways, once inside the hotel things greatly improved as we were allowed to check into our rooms, get cleaned up, and make it to the buffet breakfast. We met up with two other students who had arrived the day before and after breakfast all took a walk down to the Temple of Heaven. As we watched traffic move about it seemed a little more chaotic than in the US, but not at all like what we were led to believe. There are plenty of crossing lights and the traffic obeys the lights. 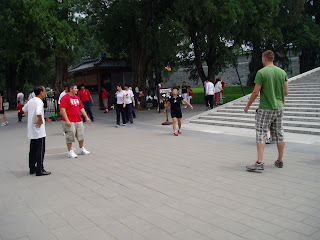 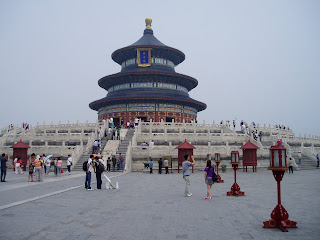 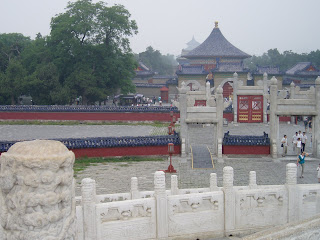 The Temple of Heaven sits on a massive garden including rose gardens and a variety of temples. There were a variety of activities taking place. Many people were out dancing in various styles to different music. Some people were playing hackey sack, but with a rubber circle attached to some feathers. We even took part in some of the fun. The temple itself was very beautiful with swallows darting in and out of the windows. Once we had our fill, we walked over to the Pearl Market so one of my friends could purchase pearls for the women in his life. 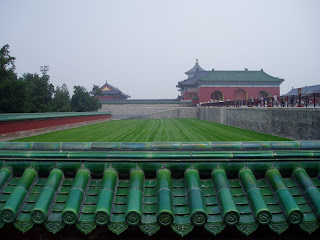 By this time it was around 1pm and we were getting hungry. We stopped briefly at the hotel before heading out to the Hutai back lakes, an active bar and restaurant scene. We had a late (and very spicy) lunch along the lake before taking a walk around the lake. As we passed bars, people would come out and try to entice us to enter the bars offering rooftop seating and happy hour specials. By playing different bars off of each other we were able to get a deal on beers at one bar. While enjoying our beers another friend from the class who had been in town for a week joined us.

After another bar, the friends I had flown over with were tired and ready to sleep. However, I wanted to keep going, so the guy who had been here for a week took us to the embassy district which has many businesses that cater to expatriates. We had some wonderful pizzas in a hole-in-the-wall place called "The Tree" followed by drinks at a bar called "The Kokomo". I hadn't even had a chance to finish my drink when the other guys came over to me saying that there were a group of local English teachers that wanted us to join them at yet another bar/club. After some searching around and some failed attempts we got drinks at a place whose name I don't even remember.

By about 1:30am I was ready to call it a day. One of my friends and I got a cab back to the hotel where I instantly passed out. Not bad for a first day in China.
Posted by Unknown at 6:25 PM