On the Tour Bandwagon 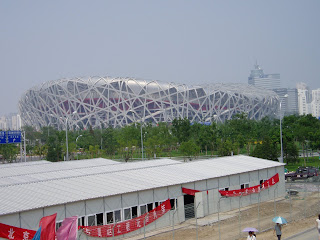 Monday was the first full day of our tour of China and quite a contrast to the smaller travel group that my friends and I were in over the weekend. We woke up at 7am in the morning to be on the bus by 8am. Once there we took an hour or so to ride out to the Great Wall of China while passing by the new Olympic “Bird's Nest” Stadium (with the requisite photo taking from the bus. 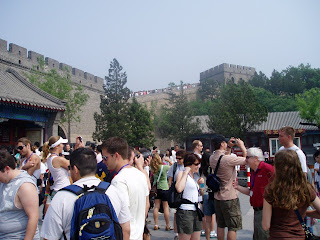 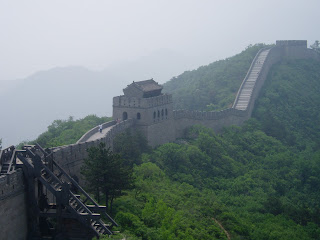 The Great Wall is actually a series of walls that were built over the ages and we went to the section near Badaling. Seeing the different wall sections and the turrets and pagodas was quite a treat, but would have been better had it not been for the haze and the smog. Still, we soon found a place to park and were out among the masses. We had a choice to go left or right and I decided to take the path with the fewest people (which also happened to be the steepest). After a short time I was able to get in a nice jog out to where the wall was closed for construction. While it was interesting, I definitely preferred the Summer Palace to the Great Wall.


After the Great Wall we went to a jade production facility for lunch. Basically, we learned how they carved the jade and the different types of jade before we were served lunch in the back. After lunch we were free to wander around the different jade items and shop. A similar experience greeted us as we got back into Beijing when we visited a traditional tea house. We learned about a variety of teas before being presented with a selection to purchase. 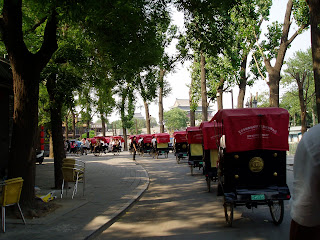 The tour bus then took us to the Hutong as we all paired up in the back of a series of tricycles. The Hutong is a traditional neighborhood of narrow streets and one-story buildings. It's right near the Houhai lakes that my group of friends had visited the first night we arrived. It felt a little silly at first, but became fun after we cruised around for a little bit. After this we were free to travel around on our own, but a few of us wanted to go to a silk market and the tour guide agreed to take us. 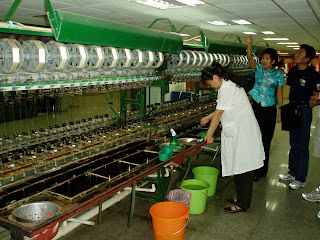 The silk shop that we visited was similar to the jade and tea places we had been earlier. A brief history and description about how they prepare the silk followed by the “opportunity” to purchase. By the time we left I was starting to feel like it had been the day of tourist traps with the amount of pressure selling at each place. After such a day my friends and I were happy to get dinner and a beer before to going to bed early in anticipation of an early start on Tuesday.