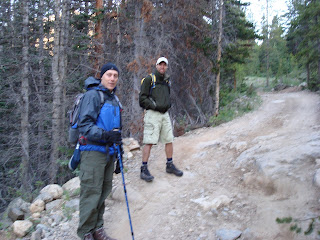 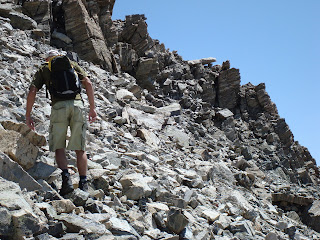 Last weekend my uncle, his wife's nephew (I guess that makes him my cousin...?), and I went on a climb up Mt. Massive just outside of Leadville, CO. We left Littleton at 3:30am and were on the trail by 6am with the outside temperature around 40 degrees. Since it was so cold and I was in my shorts I took the lead with a brisk pace to keep warm. While the first mile was easy enough, things soon got more difficult.

The night before we had decided on the shorter of two routes up the mountain (8 miles instead of 14 round-trip). Unfortunately that meant it was also the steeper of the two paths. That didn't prove too difficult until about halfway up we lost the trail in one of the many patches of snow that were still covering the mountain. After scrambling around over rocks for another three hours we made it to a point just below the summit where the two paths meet up. Even though it was noon and we had spent the better part of the morning scrambling over rocks we were excited to be back on a path and quickly made it up to the peak. 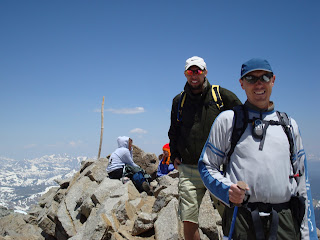 It was amazing to see over the surrounding mountains and the countryside around Leadville. However I was starting to feel the affects of the altitude with a growing headache and was ready to start back down. My uncle and cousin wanted to go back down the side of the mountain we had come up. In their pants they were ready to slide down a scree field and scramble on down. I had enough of scrambling over boulders by this point, and wanted to go down the gentler side of the mountain. 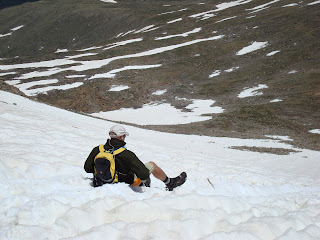 We ended up splitting up with me going down the longer, gentler side to one trail-head and the two of them going down the steeper side to the trail-head we had started at. One other appealing aspect of the longer side was a long stretch of snow from the peak that people had been sliding down. The slide gave me a good head start on the seven mile hike back to the trail-head. It helped me reach the bottom of the mountain first, but I was glad the others went the other way since that was where the truck was parked and there was about a three mile difference between the trail heads.


The day ended with my uncle and cousin picking me up and all of us driving back down to Littleton. All in all it had been a long day and I'm debating how soon I want to go back up and do another 14er. Still, nothing ventured, nothing gained.