Well, it's that time of year again. Classes are starting up for the Fall Quarter and for the first time in my life I'm going to class at night. My first one, Developing International Markets, is tonight and Wednesday from 8pm - 10pm. The other, International Political Economy, is tomorrow night from 6pm - 9pm.

I'm actually looking forward to both of these classes as I believe they will provide more of an international business focus than my earlier "core" classes from last year. What's more, I've heard other students talk about the good hands-on approach in the Int'l Markets class and the engaging presence of the Political Economy professor.

I'm a little weary of having the night classes and wonder what my energy levels will be for them. I scheduled them later so that I could work during the day and start paying off my student loans. The work isn't very fulfilling unfortunately and I'm looking for something more suited to my abilities. Perhaps I'd feel better at a smaller company or simply doing more work on my own...

As the new school year has been ramping-up I've also been doing more with my student organization, the Association for International Management (AIM) of which I'm the president. I signed up a lot of incoming students last week and this Thursday we're going to have our first meeting. It's been quite a new role for me since I haven't led a club since I was in high school. Still, it's exhilarating meeting and talking to so many new people. 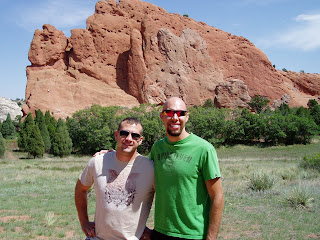 This weekend and last weekend have been good opportunities to get out and have some fun (like going down to see Garden of the Gods and Cave of the Winds with my friends), but now it seems like it's time to get back to work...wherever and whatever that may end up being.
Posted by Unknown at 12:18 PM