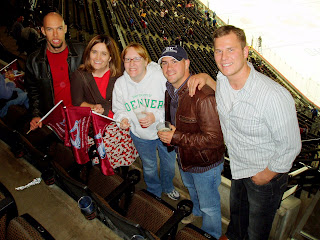 It's been another exciting weekend, albeit starting a little earlier than most. My friend Brian invited me and Erin to come out to the Avalanche hockey, season-opening game along with his wife Cassie and our other friend Neil (on the right). Even though the Av's lost (3-4) to the Boston Bruins it was an exciting game. There was a puck that shattered the glass behind one of the goalies and one player that slid skates-first into the goalie (it might have even been the same goalie). There was also, of course, the requisite fights for our viewing entertainment. We called it a night after the game though because I had to get up early the next day for a breakfast.

As part of being president for the Association for International Management (AIM) at Daniels I'm working on our Buddy Program this year. It's a program where we group incoming international students with local and second-year students to help them adjust to life here. Past participants have commented how helpful the program has been. So on Friday morning we kicked-off the program with a breakfast where the new international students got to meet their local "buddies." The breakfast went well with participants quickly becoming comfortable and talking amongst themselves; making plans for their groups to get together.

After a slow day at work I was happy to get together with Erin at the Rio in Lone Tree for some nachos and margaritas. It's starting to seem like we're addicted to Mexican food and margaritas in particular. We then did something that we had been talking about doing since Outlaw Day a few weeks back, smoke cigars. So after dinner we went next door to The Robusto Room which is a joined cigar bar and alcohol bar (only place I know in CO to smoke and drink inside). The small cigars we got were good and mild, but they left both of us a little light-headed. We finished the evening watching "Burn After Reading" at the movie theater across from the bar. It was really funny and eclectic with some darkly comedic moments.

With the weather turning mostly cold and wet these past two days, we've spent the rest of the weekend mostly inside. One of my business partner's (and Erin's friend) Cameron and I have finished up the latest eCommerce site we've been working on. It's an organic pet food store which you can see here: Organic Pet Superfood. It was certainly more enjoyable putting together than my 9-5 job with much more flexible hours. I hope we're able to do more work like this in the future. I guess we'll see this week.