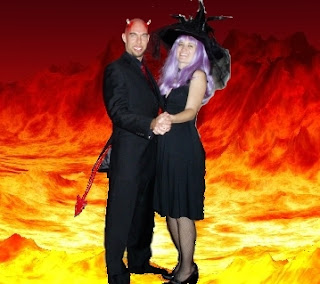 Don't let the title mislead you.  Erin and I had a very nice Halloween.  We spent Friday night out at JR's on 17th street.  There were a wide variety of interesting costumes to see.  We ended the night early though since Erin had to get up early the next day for a speech and debate tournament.

That meant I was on my own for much of Saturday when I took my bicycle out for a ride around Cherry Creek Reservoir.  The weather out here has been so nice that it's difficult not to take advantage of it.  That night Erin and I got dressed up again and made our way over to a house party.  We got to meet some really nice people along with friends of Erin's and mine.


Sunday was a relaxing day with a long walk in the nice weather and a concert at Swallowhill Hall.  This is a music group that gets together to play mostly folk music.  It turned out to be a fun evening.


Now it's back to working, looking for more programming work, and studying.  Another two and a half weeks and the quarter will be over.  It goes by so fast.
Posted by Unknown at 2:59 PM