This last week has been a wonderful blur of Southwest American countryside, family, and great food.  Erin and I left Colorado a week ago Sunday on a windy drive down to Santa Fe.  It was so windy that we were stopped by a large tow truck blocking I-25 as it worked to overturn a semi which had been flipped over by the wind.

As we got into Santa Fe the snow was gently falling and provided an incredibly romantic backdrop for an evening in a private jacuzzi at Ten Thousand Waves, a traditional Japanese spa.  We finished the evening with dinner at "The Shed," a local favorite with great fish tacos and grilled shrimp.

The next morning the romantic snow from the night before became a foot-and-a-half obstacle to continuing our trip.  With some help from the hotel personnel we were able to make it to Tocate, another local favorite, for breakfast and finally onto the highway down to Albuquerque.  While there was snow along the road as we drove there was none by the time we reached Albuquerque. 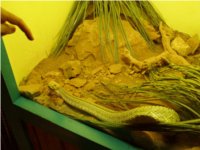 Our main reason for stopping at Albuquerque was the rattlesnake museum.  While Erin normally shrieks at the sight of a snake when we walk outside she was thrilled to see all the snakes in the museum.  We both got "certificates of bravery" for our successful completion of the museum tour.

Our next stop was the New Mexico Mining Museum in Grants, NM.  While we were expecting an old, run-down, rustic mine we were greeted with a professional, high-tech view of modern mining.  After a short elevator ride down to the mine we were free to walk around and listen to pre-recorded miners talk about the different equipment and practices in the mine.  It was a nice respite from the blizzard-like driving conditions we encountered going over the continental divide.

After a long day we finally made it to my aunt and uncle's place in Prescott, AZ.  We spent the next couple of days relaxing with my family with the traditional gift-giving and turkey dinner.  Ice in the driveway and surrounding streets left little for us to do the day after Christmas other than a short walk around Willow lake at Prescott.

In the next post I'll write about the second part of our trip and the return home.
Posted by Unknown at 5:37 PM