Last Friday night Erin and I went out to Le Central for dinner.  After we had finished our main course the topic of marriage came up and Erin asked me what I thought the point of marriage was.  You see, we had been talking over many hours in our road trip to Arizona about what our life together would look like in the future.  I told her that I thought marriage was more than the institution of being wed.  For me it is a commitment to stand by each other and work through any problems that arise. 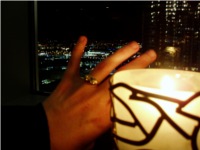 After a few more similar inquiries she said that she was asking a lot of hard questions and asked if I had any questions.  I told her that I only had one.  It was then that I pulled out my great-grandmothers ring that my mother had given me and asked Erin if she would marry me.  Thankfully she said "Yes." 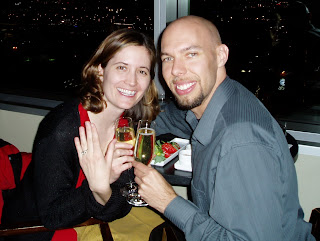 After that we got directions to a lounge at the top of the downtown Hyatt called "Peaks."  We went there for some dessert and to celebrate.  They were kind enough to give us a round of champagne when they learned that we were now officially engaged.  It went great with the dip-your-own strawberries we ordered.  I couldn't have asked for a more magical evening.

While Erin was overjoyed that I asked her to marry me, I can't say that it was much of a surprise.  The idea of marriage had come up earlier last month when my Mom had asked if I would like the diamond from her engagement ring (since the ring needed to be refitted).

Since Erin and I have had an open dialog on just about everything, I felt it best to discuss it with her first as we were having drinks one night several weeks ago.  It was at that point that she was surprised and that led to all of our other conversations about living together while we were on our trip.  We talked about getting married this summer since my parents would be out this way and it would give us time living together before we moved abroad. 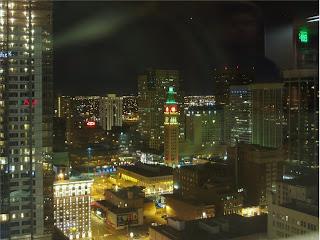 By last Friday we had already discussed it with our parents and they approved.  We had even talked about where we wanted to get married and I talked about a place I had seen when I first came out to Denver two years ago.  When we talked to Erin's parents we learned that this was Erin's sister's second choice when she was getting married only because it was too small for their group.  They suggested we call and see if we could get a date.  They said they had one Saturday during the summer open on June 27th.

This past Saturday, Erin and I went to the place, Wild Basin Lodge near Estes Park, and decided that it was where we wanted to get married.  Afterwards, Erin got to thinking.  Our first date was on Nov. 27th, 2007.  The Peaks Lounge is on the 27th floor of the Hyatt.  And now we're looking forward to getting married on June 27th, 2009 at Wild Basin Lodge.  We think it will be a very lucky day for both of us.
Posted by Unknown at 10:33 PM