It's was a busy week with class midterms, student organizing, wedding planning, and work, but on Saturday I was able to set all of that aside and spend a wonderful Valentine's day with Erin.  We started off sleeping in as we do on most weekend mornings and having a leisurely breakfast.

I then proposed we do something exciting and we made plans to go indoor rock climbing.  Though Erin's never been before and was a little frightened by the idea she agreed.  We signed up for an introductory lesson out at Rock'N and Jam'N Indoor Climbing out in Centennial.  Erin was able to learn all the basic knots and techniques while I got a good refresher.  After going up a few walls though both are forearms were pretty tired and we agreed to finish up having enjoyed the thrill and trust the activity generated. 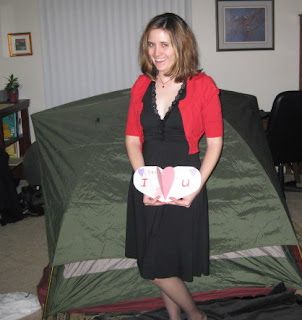 After a quick sushi snack we picked up some salmon for dinner.  We were intent on making a recipe and using an Alaskan Ulu knife that my parents had gotten me for Christmas.

Back home, we spent some time making valentines for each other before setting up my tent inside for a little indoor camping.  After a delicious dinner we enjoyed some roasted marshmallows and s'mores on a little tabletop stove that Erin had.  After that the little two-person tent proved to be a comfy getaway in my living room.  With the lights turned out and the sounds of crickets playing on my laptop, we could almost imagine that we were sleeping out in the woods.

It was a great end to the nicest Valentine's Day we've each ever had.
Posted by Unknown at 12:15 PM