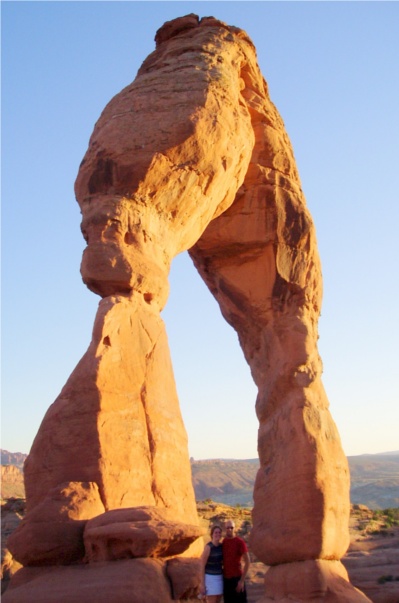 It's been four days since we left the chateau in Grand Junction and since that time we've seen some amazing scenery (mostly canyons).

After a late start and a delicious breakfast on Tuesday we were on the road for Moab...until the chateau caretaker called letting us know we had left some stuff in the room.  Fortunately we hadn't gotten too far before then.  When we had left the first time, I thought it might be too early for wine tasting, but back at the winery/chateau we decided it was a sign that we should see what they had.  After settling on a nice Reisling we were back on the road and headed into the desert.

Moab, while a short drive from Grand Junction, was far hotter than we were used to and once we found our campground we were refreshed to enjoy their pool.  Later, after having spent some time reading and waiting for the sun and the temperatures go down we headed into Arches National Park for a hike out to Delicate Arch.  It was a beautiful hike as the setting sun cast long shadows against the painted desert.  Unfortunately this also meant that by the time we returned back to camp to make dinner it was dark.  Having completed the challenge of cooking in the dark we then had our next challenge of trying to sleep in the still very warm tent. 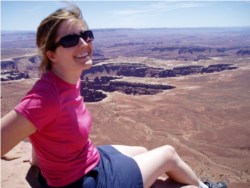 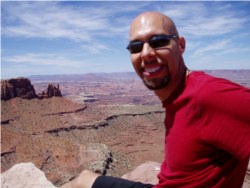 Having gone from the quiet, air-conditioned bedroom of the chateau to the hot, noisy campground we did not get much sleep.  So as the temperatures rose we broke camp and made a change in our plans deciding to visit Canyonlands National Park instead of doing another hike in Moab.  The decision was well worth it as the Canyonlands provided many exciting and spectacular views.  We continued our drive to Bryce Canyon and were able to find a great campsite even though we had not been able to make reservations.  As the sun set, the view from the rim of Bryce provided more spectacular views for us.  Sitting around the campfire that evening we were happy with the way the day turned out. 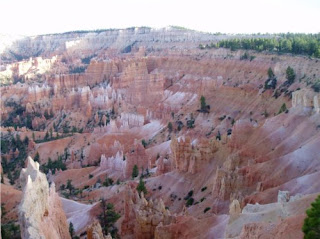 Thursday found us rising early and walking down among the hoodoos of Bryce Canyon.  With a climate that provides 200 days a year of freezing temperatures, Bryce provides an ideal environment for the freezing and thawing cycle that helps break down the rock that makes up the hoodoos.  After our walk we were ready to continue our trip with a drive down to the Grand Canyon.  We arrived with enough time (and light) to set up camp, get some wood for a fire, and get dinner cooked.  I think we're starting to get this camping thing down.

The night before, Erin had pored over our travel and hiking books making a list of things for us to see today (Friday).  So after breakfast, a load of laundry, and moving our campsite (because we weren't able to get a place for two consecutive nights), we were off.  After looking at the Grand Canyon from Cape Royal, Imperial Point, and Bright Angel Point, I have had my fill of canyons.  They've all been very beautiful and today's views have been especially spectacular, but I'm looking forward to the beach and California. 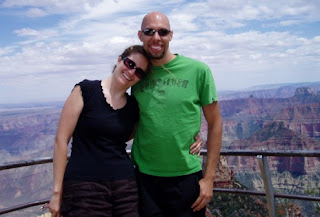 Before that though is a night in Las Vegas where we'll get to see a Cirque du Soleil show, sleep in a bed, and enjoy a shower.  We're both looking forward to it.
Posted by Unknown at 7:17 PM