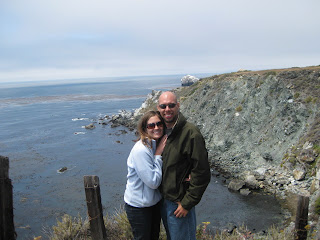 Though we had been warned about it, Erin and I were still surprised at the cooler weather up the coast of Central California.  Starting in Pismo and for the rest of our time at the coast we often had to bundle up at night and accept that our views would be obscured by fog.  Still, we found places along the beautiful drive to stop and hike, take pictures, and have something to eat.  Fortunately in Big Sur we got a bit of a reprieve from the weather at one of the better campsites that we've stayed at, Fernwood Resort and Campground.  There we found clean facilities, a site by the river, and plenty of good firewood.

It gave us the energy to get up the next day for a hike up to a view of the valley we were staying in and a nice waterfall.  Continuing up the coast there were more places to stop, but with the fog as bad as it was, we kept right on going to our hotel in Monterey.  Situated in downtown Monterey just a block from the water, it provided us a comfortable place to relax after all our camping.  After a coffee shop to catch up on email and dinner we were both ready to go to bed. 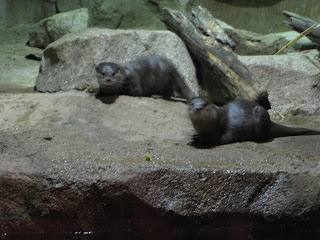 On Sunday we got up late, checked out of the hotel, and got some tasty crepes for breakfast.  We then took a walk along a delightful bike path by the shore which took us to the Monterey Bay Aquarium.  The aquarium was filled with all sorts of undersea exhibits and creatures.  Unfortunately, since it was the weekend, it was also full of families and children.  Some displays were so popular that it was difficult to get a peek and while we enjoyed the visit, we were pretty tired of the crowds by the time we were done.  That afternoon we drove up to Santa Cruz and were able to find a laundromat to do some much-needed laundry.  That night it was back to camping as we drove into the boondocks to find Sunset State Beach. 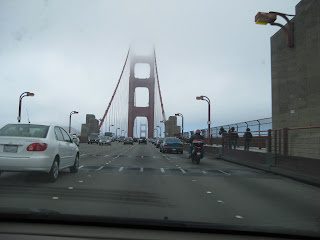 Monday was another busy day as we got up and headed in to Santa Cruz to enjoy the beach and find a coffee shop for breakfast.  Santa Cruz struck us as run-down and not as nice as Monterey.  While we found a decent coffee shop we found better beaches up in Half Moon Bay a short drive up the coast.  After a brief walk along the cliffs above the beach there we were back in the car heading in to San Francisco.  We hadn't planned to spend much time there so we just stopped at Fisherman's Wharf from some delicious lunch before heading up over the Golden Gate Bridge.  We did find some time though to stop in Muir Forest just north of the city where we went on a beautiful walk amongst the redwoods.  After a bit more time in the car we were in Napa and having another wonderful meal; this time at a recommended Italian restaurant, Don Giovanni's.  By the time we got to our camp in the north end of Napa Valley it was already dark and we were presented with the challenge of someone in already in our reserved campsite.  A brief talk with the camp host worked things out and we were soon asleep in a different site.

We didn't get to sleep too long though as we were scheduled to get up on Tuesday morning at 4:30am to go out for a hot-air balloon ride.  Imagine our disappointment though when, after dutifully getting up and on our way out to the meeting place, we get a call from the operator saying they weren't flying due to fog.  Crestfallen and irritated we returned to our camp to get a few more hours of sleep before continuing with the rest of our day's activities.  We then woke up at a leisurely pace, had some breakfast, and headed out.  Our first stop was a tour and tasting at the Castello Di Amorossa.  The castle was beautiful and we were amazed at the detail that went into its construction.  We tasted several nice wines there as well.

The next winery, Schramberg, was a little difficult to find and we showed up a little late.  We however caught up with the tour and then proceeded to taste a lot of champagne.  While both of the tours and the tastings had been fun I was getting tired so we got some lunch and returned to camp.  After some relaxation and an early dinner it was off to bed.  We decided to try our ballooning luck with another company and they needed us to get up just as early as we had on Tuesday.  Stay tuned for pictures and details of that part of our adventure!
Posted by Unknown at 11:21 PM