Last weekend was busy as Erin and I were seeing people every night.  On Friday night we met a colleague of mine from a previous job.  He treated us to dinner at a local Mexican food place since he lives just a few miles south of us and wanted to congratulate us for getting married.  I really enjoyed the food and it was nice to catch up.  I think it will be nice to go down to Monument and see him and his girlfriend for dinner again when we get the chance.

On Saturday we had planned to have our friends Brian, Cassie, and Neil down for dinner as they have had us over for dinner so many times.  It took some time to prepare all the food and make sure that the place was all cleaned up, but we all had a great time.  I hope we can do it again in a month or two and maybe even make a habit out of it.  I think I was finally getting the hang of the Balderdash game we were playing and want to have another shot at it. 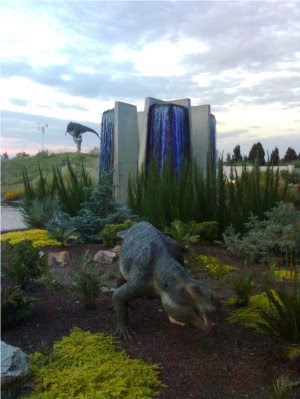 On Sunday, Erin's parents treated us to a concert at Denver's Botanical Garden.  All summer long the Garden has had bands playing on weekend evenings while people come out to picnic and listen.  They've also had an exhibit theme of dinosaurs throughout the Garden.  For our picnic/concert we listened to Los Lonely Boys and Los Lobos.  While it was very crowded as people tried to find good spots on the lawn around the arena, we were able to find a level spot that wasn't too far away.  It was very fun to have our picnic, talk, and listen to the music under the warm sunset sky.  In between sets we even got a chance to roam the garden and admire the plants and exhibits.

All in all it was a very social weekend.  It was a fun time, but now this weekend we're taking a much more relaxed pace.  I'm sure it won't be long though when we're out eating with someone else.
Posted by Unknown at 7:27 PM No comments: 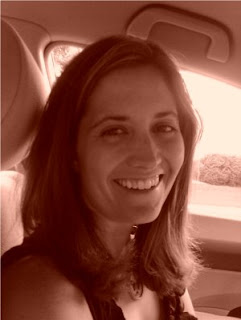 Erin and I went to our first wedding since being married this past weekend.  It was for Erin's friend Alison.  It was interesting to attend a wedding together that wasn't our own.  On our way up to the rehearsal dinner in Boulder we were able to play with our new phones (okay, I played - she drove).  We then had appetizers and a nice dinner at the Boulder Brewing Company.  While we didn't know too many people there we got to know a lot of them after a while.  Still, we were feeling a little bit on our own as the patio grew dark and Erin worried about how she would read the toast she had prepared.  I suggested that she could use one of the candles at our table.

It was then that the funniest thing of the entire weekend happened.  Realizing that the candle wouldn't provide enough light, Erin placed it back down on the table and tried to tilt the paper to catch what little light was outside to see.  After a moment or two she asked, "Do you smell something burning?"  As she lifted her head we realized that it was, in fact, her hair that was burning.  She quickly patted it out and you couldn't see any hair on fire, but the damage was done.  What's more, the stench was terrible.  We looked at each other and instantly started laughing. 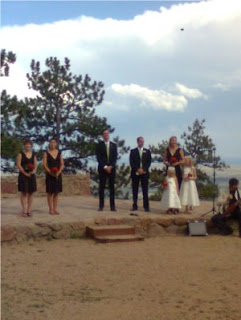 The rest of the evening went by without incident.  After a great deal of laughing between the two of us and a trip to the bathroom for Erin to wash her hair, the night finished without further incident.  There were several nice (and some funny) things said about the couple before Erin and I made our way back to our hotel for a dip in the jacuzzi.  The next day we met up with the group and all got on shuttles up to Sunrise Amphitheater above Boulder.  The views were beautiful with several hawks circling the sky.  The ceremony was similarly beautiful and showed the unique creativity of Alison, Matt, and their friends and family.

The reception followed back down in Boulder at The Rembrandt Yard, an art studio on 13th street.  It was a nice place for the reception with several pieces of art decorating the walls.  After a delicious dinner Erin and I drove back down to Castle Rock.  Another busy weekend.
Posted by Unknown at 9:24 PM No comments:

Erin and I have been back from our honeymoon about two weeks now.  That gave us some time to enjoy summer back in Denver before Erin started back at teaching.  We got a chance to have a big party for Erin's sister Amy who was moving with her husband to Baltimore as he pursues medical school and she works at a new government job.  We also got to see our friends Brian and Cassie for dinner early last week and go hiking with some of Erin's fellow teachers up at Evergreen.

One of our most interesting post-honeymoon summer experience was riding the motorcycle up to the Buck Snort Saloon in the mountains.  The road I chose to get there turned out to be pretty rough, but it was exciting.  As we turned off the main road up a dirt road to the address we wondered if we had the right directions.  Then up this narrow canyon we came to the saloon that had been in business for over a century (and it showed).  The food was good and we enjoyed the adventure of finding it.

Now that Erin's back teaching we've started to settle into a rhythm as I stay home to work and take of house chores.  It has provided me with a great deal of flexibility I found as I was called in for jury duty on Monday.  Fortunately I wasn't picked to sit on the jury but it was interesting to see the process.  I'm glad I wasn't picked since I had planned to go hiking with my uncle on Tuesday.  Erin and I enjoyed a delicious meal with my aunt Janet and uncle Reynold at their place in Littleton where I stayed that night to get up early for the hike.

Reynold and I got up around 3:30 AM yesterday to go up towards Leadville.  We got to the trail-head for La Plata ("silver" in Spanish), Colorado's fifth tallest mountain at around 14,361 feet.  It took us about 4 hours to get to the summit which was clear and sunny.  After a brief pause we made our way back down and back home.  With 4,500' of gain and 9.5 miles round trip it was a pretty exhausting hike.  It was really beautiful, but now I remember why I only do about one 14'er a year.  So today I'm back in front of the computer working and recuperating. 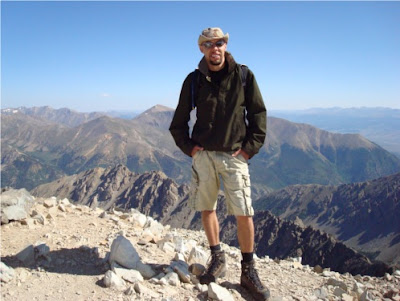