This past weekend Erin and I flew out to Milwaukee to celebrate one of her cousin's getting married.  As I had never been to Wisconsin before I was interested to see what it would be like.  So on Friday morning we got up early and got to the airport with no problems.  Arriving in Milwaukee in the afternoon we met up with Erin's parents who had rented a car.  Driving through the city on our way out to the city of Brown Deer where our hotel was provided a nice view of the city.  Much of the countryside reminded me of Georgia for some reason with its dense woods and lush green lawns. 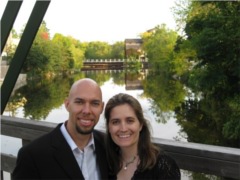 At our hotel we met up with Erin's brother, Andrew, and his girlfriend, Sara.  Once we had all checked in we found that the hotel bar was serving martinis and decided to have a drink.  After finishing our drinks we thought it would be good if we went out in search of a walk to do before the rehearsal dinner.  While we were able to find some nice river-side roads near our hotel it soon began rain and walking was out of the question.  So we returned to the hotel bar for more to drink as we played cards and waited for dinner.  The dinner was a delicious Italian meal out at the brides' parent's house where I got to meet much of Erin's extended family.  They were all very nice and we had a great time.  We even had a chance to sit around the fire pit as the rain let up.

On Saturday we got up and had breakfast at a nearby Denny's before heading out to walk around a lake we had driven by the day before.  The area was very nice and green, but with the sky still overcast and the humidity starting to be felt more heavily, it seemed to be a very wet area.  After getting cleaned up we were off to the traditional Catholic wedding just outside of historic Cedarsburg.  Afterwards, as pictures were being taken we had time to wander around the charming city before the reception.  One of our most favorite places was a brew pub down on the river.  In a very relaxing setting Erin finally found a beer that she liked (Framboise) and we all enjoyed the chance to talk.  As the reception was being held at the hotel we were staying at we eventually made our way back there for the festivities.  The new couple looked very happy together as they danced and we got a chance to see a slide-show of pictures from their lives. 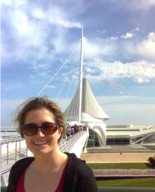 For Sunday we had talked about several potential things to do before we all left.  We started out with some geocaching, using a GPS to find a box hidden by others.  While it took us a while to find the cache it turned out to be in a very pretty nature preserve.  We were then on our way back to city to see the Andy Warhol exhibit in the Milwaukee Art Museum.  The museum had some very nice exhibits and some exciting architecture.  It includes an elaborate, wing-like brise soleil which shades the museum (pictured as its opening).

Before too long though it was time to catch our flight.  We said our goodbyes and made out way to the airport.  It was good visiting with all of Erin's relatives and getting to see Wisconsin.  I certainly have a higher opinion of the area now that I've had a chance to see it first-hand.
Posted by Unknown at 10:26 PM No comments:

This past weekend was an exciting one for Erin and I as we did a diversity of activities.  Friday, after Erin got off work, we went over to the Union for happy hour - which is turning out to be a low-cost ritual for our Friday afternoons.  That evening we played a board game while eating apple pie and drinking port.  It was a very enjoyable experience that Erin had set up and shared with me. 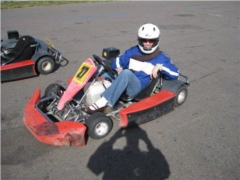 On Saturday we went to celebrate our friend Andres' birthday out at the Centennial Track.  There we all got suited up with helmets, gloves, and overalls before climbing into karts for some racing around the .8 mile track.  While we only got to race for about 10 minutes it was fun.  After the race we hung out a bit with Andres and the rest of his friends before going over to Erin's parent's house for dinner.

Erin's sister Amy was in town preparing to defend her thesis on Monday, so we went to see her and visit with Erin's parents.  They took us all out to this authentic Mexican restaurant called "El Paraiso" in North-West Denver.  Unlike the typical tacos and burritos this place had a wide variety of traditional Mexican dishes.  The food turned out to be good and with generous portions.  There was also a mariachi band playing adding to the atmosphere.

More fun came later in the weekend as Erin and I went downtown to the Denver Museum of Nature and Science to watch an IMAX show.  Being located in city park, the museum's location gave us a chance to have a nice walk around the park before our show started.  We watched a show called "Wild Ocean" about an aquatic feeding frenzy that happens off the coast of South Africa each year.  It was amazing being immersed in the underwater action the way that an IMAX movie provides. 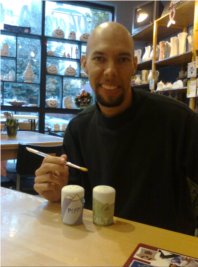 After the show we went to Ceramics in the City where we got to pick out a piece of pottery to paint.  After a long deliberation we settled on salt and pepper shakers along with a common theme of nature.  We both had a really good time as we painted our designs on our shakers.  We finally finished and gave the shakers to the attendant to be glazed and fired.  We're looking forward to seeing how they turn out next week.
Posted by Unknown at 7:59 PM No comments:

Erin and I often joke about how the main reason for this blog is so that when we're old and our memory goes it will be the only way for us to remember what happened.  The thing is, sometimes I even forget to write and then can't remember what we did even two weeks ago.  So here's my best stab at what we've been up to (mainly gathered from what's still on my calendar):

The last week of August found me in the doctor's office for a regular checkup with everything checking out well.  Later in the week Erin and I met with an accountant to see if we needed his help with taxes now that we're married.  While he was very informative (and talkative) I don't think we actually make enough money right now to need his services (or afford them).  That weekend Erin and I had a nice day downtown as we went to the Tattered Cover and enjoyed a glass of wine in the Highlands.  That weekend also gave us an opportunity to get out on the motorcycle and ride around the countryside.

Last weekend Erin and her girlfriends went up to Vail for a jazz festival.  She really enjoyed seeing the Black Eyed Peas and being with her friends.  While I spent most of that time at home I went out several nights with my friends as well.  It was fun to spend time with our friends and on Sunday when Erin got back it was nice to be back together.

For this past week I've been dog sitting for my aunt and uncle.  They have a very nice dog that has a lot of energy and goes crazy sometimes around other dogs.  It's been good going up to see her each day and take her out for walks.  Since I only see her in the afternoons it has given Erin and I the opportunity to go out each night this weekend.  On Saturday we went out to watch a movie ("The Proposal") and have dinner with our friend's Brian and Cassie.  This night we went over to Erin's parents for a wonderful Lemon Chicken Picatta dinner.

So that's the last few weeks in a nutshell.  Hopefully I'll remember to keep up with the blog so it doesn't go so long.
Posted by Unknown at 9:36 PM No comments: