This past week has been an interesting one as we got our first major snow storm.  What was remarkable was that because of it Erin got, not one, not two, but three snow days where she didn't have to go in to work.  On Wednesday she was absolutely ecstatic and while I was happy for her I wished at the time (6am) that she would stop jumping up and down on the bed so I could get my last hour of sleep.  On Thursday, as the storm worsened and Erin learned the night before that there wouldn't be school for a second day we were both happy.  By Friday though, as Erin learned that she would have a third snow day, her feelings were mixed.  Having been cooped up inside for the past three days we were starting to get a little stir crazy.  Erin's also worried now that she'll have to make up some of those days on Saturdays or in the summer.  Still, I'm happy for the extra time we got to spend with each other (even if I still had to do my work). 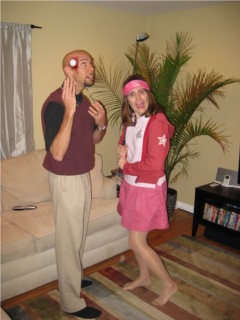 By the time Halloween came on Saturday night we were excited to get dressed up and head out.  We were having dinner and doing pumpkin carving at our friend's Rachel and Cameron's house.  The party was a lot of fun as we had some delicious chilli and enjoyed carving our pumpkin.  While our pumpkin was very soft and kind of frozen from sitting out in the snow storm we were still able to carve a decent Frankenstein monster in it.  By the end of the night we were exhausted though and happy to sleep in Rachel and Cameron's guest bedroom.

For our costumes Erin had seen a Halloween costume news piece with a picture of a guy with a golf ball sticking out of his head so we re-created the costumes of an unfortunate golfing accident.  The great part is that we were able to get most of our costumes at a Goodwill store for very little money.  Of course as we were taking the photo Erin asked, "So how do I hold this golf club?"...It may be awhile before I take her golfing.
Posted by Unknown at 9:06 AM