I've been very busy with work these past few weeks and have let blogging fall behind, but I'm having a hard time focusing on work this morning so I thought it was time to catch up here.

First off, Erin and I had an enjoyable trip out to California for Thanksgiving.  While there were short lines at the airport and a comfortable flight over, our smooth traveling came to an end when we got out onto the 405 freeway in Los Angeles.  I knew it was going to be bad from previous experience, but I guess I hadn't considered how bad when we were making our plans and buying tickets.  Six hours of driving later we finally made it to my parents place in Tulare.  The next day, Thanksgiving, was clear and warm out so we enjoyed going on a walk and sitting out in the sun before having a delicious meal.  Friday night gave us a chance to see our friends Joe and Angie before heading back home on Saturday.  As the trip back took far less time we still had the energy when we got back to Denver to go out and celebrate two years of being together at Nono's Cafe where we had our first date.

The main excitement last week came when someone at Erin's school was giving away tickets to the musical "Spring Awakening".  Erin had been interested in seeing the musical mainly because the theater group had sent out a rare warning on the potential shocking nature of the play.  That and the fact that Erin was able to get the well-placed seat tickets for free enticed me to join her.  The play did deliver on the shocking promise of brief nudity, simulated teenage sex, and other adult themes including rape and masochism.  However, that didn't bother me as much as the singing which didn't seem to always fit with the original play and the expressionist nature of bright lights shining on the audience.  The on-stage band's musical performance though was often very good and the whole thing was a unique experience.  Still, I don't think I'll be attending many more musicals in the near future. 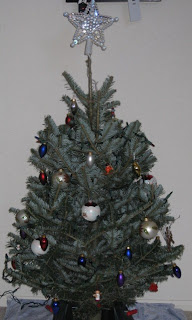 The highlight of this week has been picking Erin's parents up at the airport after their exciting trip to Argentina.  Unfortunately, far too much of that excitement came from being mugged in Buenos Aires at the end of their trip.  Fortunately both of them came through the experience with only large scrapes and some money gone.  Erin's mom even got her snatched purse back after visiting the police station in the rough neighborhood where the attack happened.  Erin and I are glad that they made it back home safe and sound.

Well, I guess I had better get back to work now.  But I'll leave with a picture of the little Christmas tree that we decorated Wednesday night.