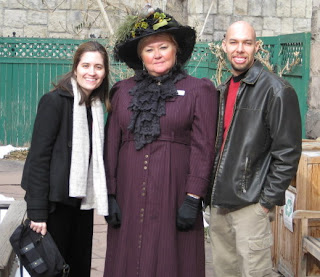 On Wednesday last week Erin and I went to the Molly Brown House with her family.  We were very excited to go since my aunt Janet was giving the tour and we were finally able to see it.  While she's been a guide there for quite some time we had only seen her there once before in November when she was dressed up like (and in the character of) Margaret "Molly" Brown.  Unfortunately at that time there wasn't an actual tour so we found ourselves wanting to learn more.  We were not disappointed as Janet told us everything we wanted to know about Molly Brown as she took us from room to room in the house.  It was a fun experience to see how people lived back then and the kind of life that Molly Brown had led.

After the tour we found a really good BBQ place on Colfax called Wolfe's with a kindly elder man behind the counter.  We came to learn that he was, in fact Wolfe and that he had been at that location for the past 15 years.  After lunch we walked over to a jewelry and trinket store called Pandora Jewelry so Erin's brother could find a gift for his girlfriend.  All was going well until we tried to go to our next activity: seeing Avatar in 3D on the IMAX screen at Colorado Blvd. and I-25.  As we pulled into the already full parking lot we soon learned that the show was sold out and would be sold out until the 10:25pm showing on Friday.  While we had a similar difficulty the weekend before we found it hard to believe that the show was sold out again.  Erin and I may try again to see the show this weekend.

New Year's Eve found Erin and I back at her parent's place for a delicious dinner.  It was a great meal before we went out to a party for the family's friend (and our wedding guitarist) Jim Butler.  His 60th birthday was a few days away and so he had combined the celebration with New Year's Eve at the Swallow Hill Music School.  It was nice to catch up with him and his family.  After the party Erin and I decided to celebrate the New Year's Eve back at her parent's place.  There was a video game her and her brother had been trying to beat earlier that day, but hadn't been able to because of technical difficulties.  Well, three hours later (and two hours past midnight) we finally beat the game.  While it wasn't the typical New Year's Eve bash, it was a lot of fun and it felt like we had started the New Year off to a great start.
Posted by Unknown at 9:07 PM