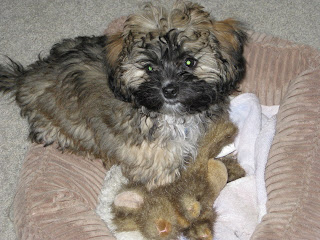 This past week found Erin and I looking after her parent's 12-week-old puppy, Dante.  He is a very cute Shizu-Poodle (shipoo) mix and full of energy.  Like most puppies, he is also quite a handful.

Erin's parents dropped him off on Friday the 26th before heading out on their trip to Texas the following day.  Unfortunately that night was the first night of a speech and debate tournament that Erin was attending so it was just Dante and I for most of the day.  Dante demanded attention for most of that time and we saw how attached he was to people that night as we put him in his crate to go to sleep.  We had originally put the crate in our laundry room, but after an hour and a half of off-and-on barking/whining we brought the crate into our bedroom.  Fortunately that got Dante to go to sleep and be quite.

Dante and I spent most of the next day together as well with Erin's tournament continuing into the night.  While it was fun to play fetch with him or go out on walks, he made it very difficult to get much else done.  By the time Erin got home I was exhausted and glad that Sunday was her turn to look after him.  The rest of our week went similarly as I would look after Dante in the morning and Erin would help look after him after she got home.  All in all it was an exhausting experience that led us to believe that it would be a while before we got such a demanding pet of our own.

The other big news from this week was a meeting with real estate brokers to put Erin's condo on the market.  My friend, Brian, has been working as an associate broker at Peak Realty and so came down to visit with his associate and mentor, Levi, on Wednesday.  Over dinner and for a full four hours we went over all the details of selling the condo.  It ended up being a very stressful experience with all the things we would have to do to get the place ready and the fact that we would likely need to pay money since the place is "under water".

Thus we've spent much of this past weekend sorting, packing, cleaning, and storing our stuff.  We've gotten a storage space and divided it into sections for stuff we're storing, stuff we're shipping to Taiwan, and stuff we plan on selling at a garage sale.  We've staged the front rooms of the condo so they look more appealling.  It was nice to get away from all of this on both Saturday when we had a wonderful meal at my Aunt and Uncle's place (after dropping off Dante) and again on Sunday when we had a delicious pizza at Erin's parent's place.

It's been a pretty stressful week, but looking at the condo and all we've accomplished gives a good feeling.  There is a lot to keep track of as I'm applying for an IT Coordinator position at the school that Erin will be teaching at next year and our wedding videographer works to finish the video of our wedding.  It can be quite tiring, but also exciting as we work towards this next adventure in our lives.
Posted by Unknown at 6:54 PM