Spring Break, Easter, and The First Ride of the Season

The past few weeks have seemed like a whirlwind of getting ready to go to Taiwan, trying to sell the condo, and working.  There have been several highlights during this time, but I just haven't been motivated to write all that much.  So on this rainy spring day as Erin and I sit in Starbucks waiting for a showing to finish up at the condo, I thought it would be nice to reflect on what we've been doing over the past month. 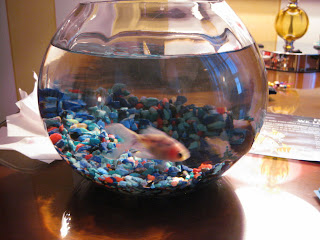 Erin's Spring Break was a few weeks ago and provided us some time to catch up on rest and some other work that we needed to do.  To start the week off, Erin's parents had gotten us a night at the Monaco hotel downtown.  One of the things that attracted us to the place was the opportunity to have a goldfish in our room.  We spent the night out on the town with tapas at The Ninth Door, and vodka at The Red Square.  It was a very enjoyable evening together and gave us the strength to get through all of the things we had to do for the rest of the week (like taxes and packing).  We also got a couple of chances to eat with friends as our supper club met at the delicious L'Asie Fusion Bistro and we celebrated Erin's friend's birthday.

The following week it was back to work, but by the following weekend we were relaxing again as we enjoyed the company of Erin's family.  Erin's brother, Andrew, was in town so we had dinner with them on Saturday after Erin had gone to see Mary Poppins (the musical) with her mother.  The following Sunday was Easter and we enjoyed a delicious home-cooked meal with Erin's parents. 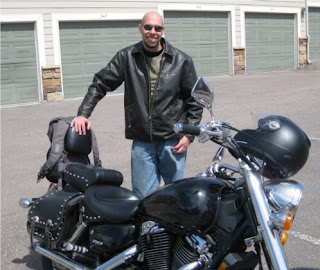 Last weekend Erin and I got the motorcycle out of storage and had a chance to ride it over to the foothills for a hike.  It was really fun to be back on the bike and the sun was shining.  We went on a relatively long hike in the foothills, especially as the first big hike of the season, but the views from the hill we climbed were beautiful.

I got to do a ride of a different kind on Thursday as I went with my friend Andrew up to Winter Park for some snowboarding.  It was another beautiful day and though the snow was slushy we had a lot of fun.  It's the only time I've ridden this season and will be the last time since the season is almost over.  It will be at least two years until I have the chance to ride again so it was good to get on the board again before it goes into storage.

This weekend is being very socially busy.  Starting last night Erin and I went out to an alumni reception for my school at the Phipps Mansion.  It was good to see my fellow students and faculty.  Afterwards we went downtown with my friend Andrew where we ended up playing pool at Wyncoop while another group of my friends was having dinner at the same place.  We didn't find that out until we had left and they called, but we finally ended up together at Fado's.  My friend Steven who I knew in the Army was in town.  So I spent the rest of the night with my Army buddies after Erin went back home.  Tonight, my friend Brian is having a going-away party as him and his wife are moving to Alabama.  We're going to miss them and remember fondly the great times we've had with them.
Posted by Unknown at 3:01 PM