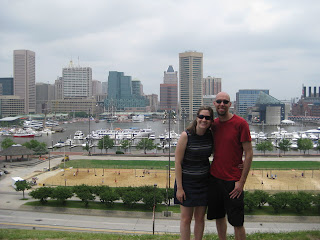 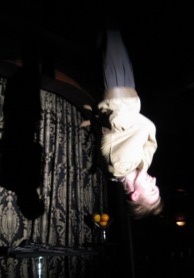 Erin has been wanting to share New York with me as well as see her friends on the East Coast.  So on Friday night we I flew out to Baltimore with a layover in Dallas/Ft. Worth.  The layover went quickly as we had a glass of wine at the "first airport wine bar" in the country.  Even though we got in late Erin's sister and brother picked us up and drove us back to their beautiful townhouse in the city where we promptly went to sleep.

On Saturday we climbed up to Amy & Kevin's roof where we had breakfast on a deck.  It was a great view and we would enjoy many more meals up there.  We were soon ready to explore the city and walked out to Federal Hill and then along the back harbor.  It was a charming part of the city though there were plenty of crowds as well.  After walking for a while we came to a nice taco place where we got lunch and took to a nearby square.  After lunch we had "snowballs" a Baltimore treat we're told, which consists of shaved ice, marshmallow, and a flavored syrup.  After walking back to Kevin and Amy's place we took a short trip over to see Edgar Allen Poe's grave.  It was in a nice little burying ground by a church.  We then had some time to relax before getting some Thai food for dinner, again on the roof deck.  Then we were off to Illusion, a magic bar/lounge where $5 and a two drink minimum got us front-row seats to a very entertaining (though somewhat cheesy) magic show.  As we returned home past the crowds of late-night bar- and club-goers I was glad to be getting some rest. 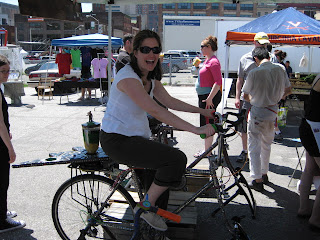 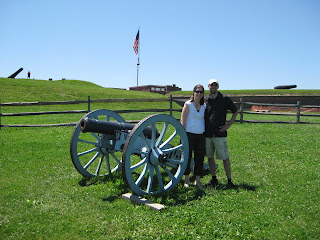 On Sunday we started again with breakfast on the roof, but then drove downtown for the weekly Farmer's Market.  There was a wide variety of food and people so that we were each able to find something that we would enjoy later for lunch.  Erin even found a place where she could peddle a bike to mix up her smoothy.  We took these back to the house from where we started walking out to Ft. McHenry.  While not a short walk away I was pleasantly surprised at how it was possible to walk to so many things.  The Fort was famous for inspiring the National Anthem after surviving an attack by the British.  While we didn't go inside the fort we walked around the park that surrounded it and enjoyed a video highlighting the Star Spangled Banner.  We had time to relax again in the afternoon before driving to a suburb of Baltimore for dinner at a very fancy place called the Woodberry.  We felt so full upon returning that we took another walk up Federal Hill and around part of the harbor before heading back to play a board game. 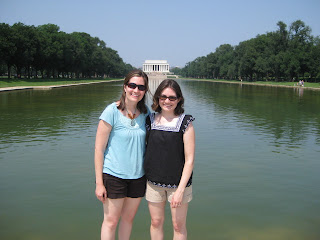 Memorial Day found us up early and on our way in to Washington D.C.  While we saw some preparations for a parade there didn't seem to be too many people as we walked around the Mall.  As it had been a long time since either Erin or I had been there our walk took us by the main monuments and memorials: Washington Monument, World War II Memorial, Korean War Memorial, FDR Monument, Lincoln Monument, and Vietnam Memorial.  It ended up being a lot of walking on a very hot day so that by the time we got downtown for lunch at the Matchbox we were sorely in need of fluids and A/C.  We decided then to call it a day and headed back to Baltimore where Amy and Kevin made a delicious dinner and we got one last chance to enjoy their deck. 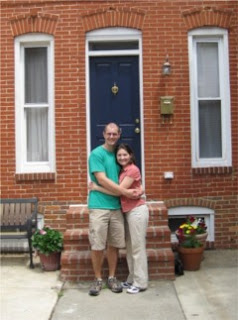 Today, as Amy and Kevin went off to work and school, respectively, they dropped us off at a bus station so we could get on a bus to New York.  It has been really nice staying with them and it will be good to see them again this summer one more time before we head out to Taiwan.  Baltimore has also turned out to be a fairly charming city with lots to do within walking distance.  The heat and the humidity are taking a little getting used to though.
Posted by Unknown at 6:37 PM