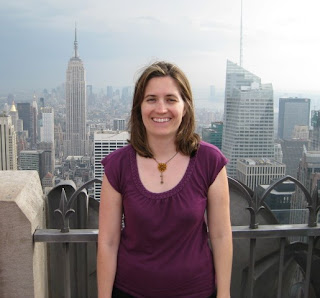 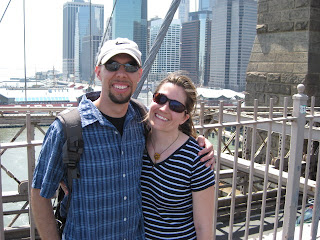 We arrived in New York City on Tuesday afternoon after a long, but uneventful bus ride from Baltimore.  As it was around noon when we got to our hotel, the Lucerne, we weren't able to check in so we had them hold our bags as we headed off to explore the city.  The subway took us down to Chinatown in the southern part of the city for a recommended thrifty lunch of dumplings.  For under $10 we were both able to get a sesame pork "pancake" and several pork dumplings at Paradise Dumplings.  It would be one of the least expensive meals of our trip.  After lunch we had decided to walk back to our hotel in the Upper West Side to see and experience the city.  It was a long walk, but we stopped occasionally, first at a tea place and then to go to the top of the Rockefeller Center.  The view from the "Top of the Rock" was impressive though we had hoped for more of an explanation of what we were looking at.  Back at our hotel we were able to get cleaned up and relax a little before going out to dinner.  We were able to find a nice Italian place with an attached jazz bar in the Village.  While the food was good it was the atmosphere that really sold us and made the night the most romantic we'd had on the trip.

On Wednesday we enjoyed sleeping in before heading out to breakfast at one of Erin's favorite cafes, The Grey Dog.  The french toast was delicious and gave us plenty of energy to walk around The Village where Erin had lived and spent much of her time while at NYU for grad school.  After that we were off to walk across the Brooklyn bridge.  It was a beautiful day for a walk and it was nice being able to see so much of the city.  On the other side of the bridge we had lunch at The River Cafe, a fancy though somewhat snooty cafe with a beautiful riverfront view of the city.  Back across the bridge and to our hotel we had just enough time to get ready before heading out to the theater.  We had decided to see "The 39 Steps" a somewhat-slapstick comedy based on an Alfred Hitchcock film by the same name.  It was very impressive the way four actors played the roles of over 100 different characters and how the arrangement of sparse stage elements conveyed the sense of a large array of locations.  After the show we had a satisfactory dinner of sushi before returning to our hotel. 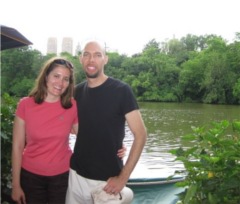 For our final day in New York we had breakfast in the cafe attached to the hotel before checking out and heading to Central Park a few blocks away.  It was nice strolling through the park and enjoying the island of nature in a sea of city.  We were tired from all the walking though and it was nice to stop at the boathouse for drinks and a light lunch.  We did some more walking around afterwards and finished at a tribute to John Lennon.  Finally we returned to our hotel for our bags and started the hectic trip out of New York.  It didn't help that it was rush hour with everyone headed home, but we were finally able to get to Newark, NJ to meet up with our friends Stephanie and Shawn.  They took us to a wonderful Portugese restaurant with large portions of paella and sangria for dinner before heading back to their place in New Brunswick, NJ.
Posted by Unknown at 9:28 PM