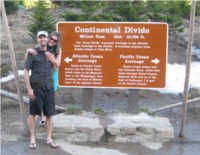 I'm still a bit behind on updates, but last week Erin and I went up to the mountains in celebration of our one year anniversary.  The night before we left we went out to supper club at Cafe Brazil and had a wonderful meal with our friends.  The next morning, though stressed about a growing likelihood of selling our condo and various furniture we were able to pack up and hit the road.


Our first stop was Evergreen where we enjoyed a wonderful lunch and some nice wine by the creek side.  I also got the chance to get Erin a necklace as her anniversary gift.  After a while we were back on the road enjoying a beautiful day in the mountains.  We took the long way to Estes Park going over Berthoud Pass, through Rocky Mountain National Park, and over the Continental Divide.  The drive was wonderful, though a little scary at points as we went to the top of the mountains.  Before nightfall we got to our campground, set up camp, and started cooking dinner.  It took quite a while for dinner to cook and by the time we were done eating all we wanted to do was watch the fire before going to sleep.


The night turned out to be colder than we had expected and we didn't get the best of sleep, but the next morning we were up and ready to hike after breakfast.  We went to a hike to three lakes in the park that Erin enjoyed.  The views were great, but the trail was very crowded.  Afterwards we went into town to enjoy some nachos and get online.  An appraisal had been done on our condo and the buyer was supposed to have done an informal inspection.  Back at camp we had a delicious dinner of chicken and dumplings that also took a long time to cook.  It may be part of camping, but I think on future trips we'll need to come up with some easier meals. 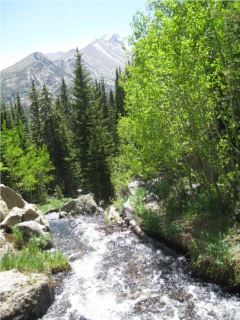 On Friday, after rearranging our sleeping bags and getting a better night's sleep, we were ready for a longer hike.  Back in the park we found one to two different lakes that wasn't as crowded as the one the day before.  The views were again spectacular on the beautiful day.  We were even able to see the giant plume of smoke off in the distance caused by a new forest fire.  After the hike we returned to camp to relax and get some showers.  It was good to get cleaned up before going out to dinner at The Dunraven Inn.  The food was delicious and it was so nice not having to cook for a night.  Back at camp we still had a fire and a little desert before going to bed.

On our last morning we packed up camp and went into town.  Estes Park was having a Scandinavian festival which we enjoyed walking around and watching.  We did one final hike around Estes Lake before heading back home.  Along the way we were able to pick up our wedding video from our videographer so we would have it for our anniversary night on Sunday.

Back home on Sunday I went to the start of a 4-day conference in Denver sponsored by the International Society for Technology in Education (ISTE).  As I prepare to become an IT Coordinator at the school Erin and I are going to my hope is that the convention provides some useful information.  Sunday night Erin and I went out to "Indulge" in Highlands Ranch for a delicious meal of tapas.  Back home we opened a bottle of wine we had saved from our honeymoon while we looked over pictures from our wedding and our wedding video.  All in all it was a wonderful anniversary and I look forward to having many more with Erin in the future.
Posted by Unknown at 10:53 AM