The challenges and joys of getting away for a weekend

This past week has been a busy one as Erin and I continue to settle in to our new home.  We've gotten a foam top for our very hard bed and a toaster/oven for the kitchen while we've struggled to dry and iron our clothes.  At work, my teaching counterpart Peter has taken over my 4th and 5th grade classes giving me more time to fix issues with spam emails and Windows administration.  Meanwhile Erin is neck-deep in grading while keeping in mind the demands of some of the parents she met at an Open House night on Thursday.

With all of these things happening we were looking forward to getting out of town for the weekend at a hot springs resort on the Eastern coast of Taiwan.  In order to do this we received a lot of help from a fellow teacher who booked our room and got our train tickets.  She even wrote out notes in Chinese that we could show people for help.  So on Friday after school we took a taxi and rushed down to the train station.  We were able to find our platform and our train amongst the throng of people though the rush had left us a little stressed.  Fortunately the train ride was pretty and serene, but when we got out at our station we were confronted with a challenge.

Our friend at school had told us there would be someone waiting for us with a sign when we got off the train, but when we arrived they weren't there.  In our hurry to leave we hadn't bothered to ask where we were staying and so we felt a bit stranded at the train station.  Fortunately, more people from the school were coming on a later train and when they got there someone from the hotel showed up with their name on a sign and we were all able to get to the hotel for check in.

We had arrived so late though that our best option for dinner seemed to be room service.  When I called what I thought was room service though I couldn't get anyone who spoke English.  So someone would answer, I would ask for something or ask if they spoke English, they would indicate that they didn't and seem like they would find someone who did.  Unfortunately this routine played out several times as one person after another would pick up the phone, find out I spoke English, and put the phone back down as they tried to find someone there who also spoke English.  We were so tired and stressed that it was all we could do but laugh at the whole exchange.  We finally got some dinner and went to bed shortly after. 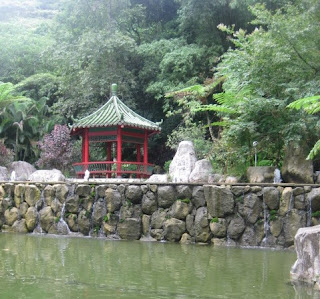 After some sleep on our room's very hard bed we woke up the next day feeling better.  After some breakfast we took a walk around the hotel to see the hot springs, koi pond, and some aggressive black swans (among other caged animals).  We then went back to town to rent some scooters to ride up and down the coast.  It was very liberating to have our own transportation and using it to find our own secluded beach made things even better.  We even found some roads with little to no traffic for Erin to practice her scooter driving on.  It was definitely a fun way to see the island. 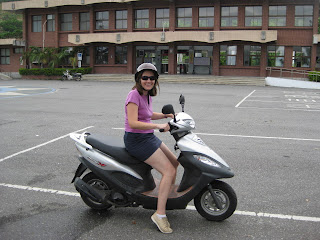 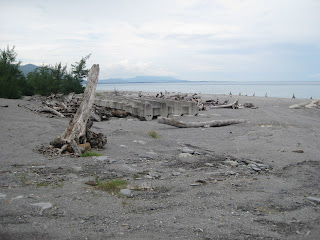 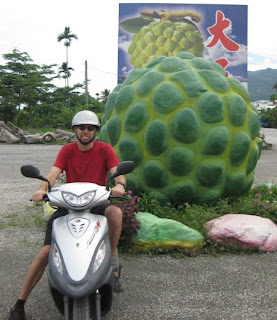 While out riding we saw many stands for a fruit that's supposed to be very popular here.  Someone back at school called it "Buddha-head" fruit because it looks like a Buddha's head I guess.  So on our way back from riding we stopped at one of the stands and got some.  They're tasty, though a little messy.


Saturday night we watched an aboriginal dance show which was fun.  While the dances looked traditional the music seemed to be influenced more by Lady Gaga than traditional music.  It was all a bit funky.  Afterwards we went to the spas that were the draw for the hotel.  They had a wide variety of spas and we eventually settled in one that was colored and scented by roses.


On Sunday we took a trip over to a nearby national forest which turned out to be very nice.  Our camera broke after taking the first shot so we didn't get many pictures, but it felt very jungle like with some beautiful waterfalls.


Getting back to Kaohsiung turned out to be very easy and now we're left to prepare for next week.  The trip ended up being relaxing, but there were definitely some challenges that went along with it.  I'm glad we did it and now I feel we'll be better prepared for the next time we go out of town.
Posted by Unknown at 4:34 AM