I've been slacking on writing the blog for a few weeks now and it's not for lack of things going on (as you can tell from the title of this post).

As this month started our new island home was being buffeted by typhoons with heavy rains and winds.  One storm looked liked it would be so bad that school was closed for a day (decided by the city).  We went in like we do every day and the superintendent was standing there at the front of the school telling us that there wouldn't be school.  It was nice to go back home and relax even if the storm wasn't really that bad.  It seems like we've had stronger storms since then, but no more days off school. 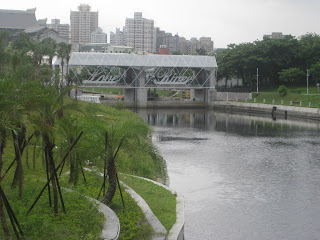 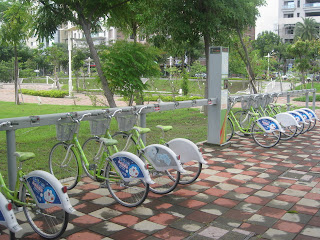 The following weekend we got up Sunday morning and walked over to the river where we found a stand to rent bikes.  After figuring out the automated stand we had our bikes and were riding down along the river.  It was a nice ride that took us down to the bay and showed us an Outback Steakhouse that was serving American-style brunch.  We eventually made our way back to the original stand, put the bikes back, and would have paid for the rental if my credit card hadn't had a block put on it.

Later on Sunday I had some friends that were in town so we met them for tea.  We had a chance to see them again the following Wednesday night.  They were so nice to help us with getting SIM cards for our phones and showing us a good place to get some Belgian beers.  Afterwards they took us to a Szechuan hot-pot place for dinner.  It was fun dunking the different food in the pot of boiling broth and the food tasted really good.

Unfortunately the next day neither of us weren't feeling very good.  I guess our stomachs haven't quite become accustomed to Taiwanese food.  Erin soon got better, but my stomach/colon has issues so it's taken me longer to recover.  In order to get a refill on prescriptions and hopefully get better a very nice teacher at school agreed to take me to see a doctor at the hospital.  It was an interesting experience as appointments are made based on a number (like when you take a number at DMV), not by time.  So when we got to the hospital with the doctor I learned we had number 59 and the doctor we were seeing was at number 24 (and moving slowly).  We eventually saw the doctor and I got some medicine, but the whole process took several hours.  On the plus side, the doctor's visit plus medication for a month came to a total of about US $15 (compared to hundreds I would pay back in the US). 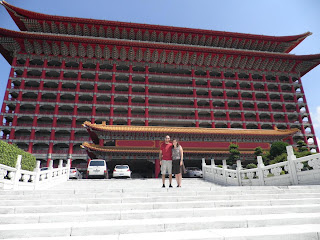 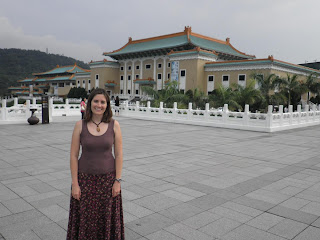 Even though I wasn't feeling well Erin and I had a room booked in Taipei last Saturday and I didn't want to pass up the opportunity.  We took a very nice ride in the fast train Saturday morning which allowed us to see the beautiful countryside.  Once in Taipei we had dumplings at a great lunch place before going to the National Museum.  The museum had many antiques from China including jade carved to look like a leaf of cabbage and another carved to look like a piece of pork.  After the museum we saw the Chiang Kai-Shek Memorial before heading out for some delicious pizza.  Our final adventure was a traditional Chinese opera which was very peculiar, but entertaining.  Exhausted, we returned to our room at the Grand Hotel.  We came back to Kaohsiung on Sunday morning.


Those are the highlights from the past few weeks and I'm sure Erin will have more detailed stories in her blog.  Going back over it I'm amazed at all that we've done and yet we're just getting started.
Posted by Unknown at 6:54 PM