Living it up in Kaohsiung

These past two weeks Erin and I have been getting to know Kaohsiung a little better rather than traveling out of town.  That's mainly been driven by a need to get caught up with work more than anything else.  It's always fun to get out of town, but it also involves more planning and can be stressful dealing with yet another foreign place.  So the past two weeks have been a bit more easy going.


During that time one question that we've been struggling with has been what to do about transportation.  After watching how chaotic scooter drivers can be in the city and even noticing two in minor accidents we soon ruled that out for the city (we still like to get them in less populated areas).  Next we considered a car and started the process for getting one.  However, we soon learned that our apartment doesn't come with a parking space which would mean we would have to rent it ourselves.  At about US$75 a month it would be a major part of owning a car.  What's more, finding car parking in the city can be difficult and driving can be stressful.  Well, we finally decided that our current practice of walking, taking cabs, and using the subway was working just fine.  We're pretty lucky to live very close to a subway stop that allows us easy access to much of the city.  We may get something else in the future, but for now I think we'll just stick with that.


Staying in town on the weekends we've been going on to eat much more often.  A week ago Friday Erin went out with some girl friends to watch a movie and have margaritas while I met a friend from college who happened to be in town.  On Saturday night we made reservations and ate at a wonderful rooftop Thai restaurant downtown.  The views were great and the food was delicious.  It's definitely a place we'll be going back to.  On Sunday we rented and rode bikes down the river to an outback Steakhouse for a large Western-style dinner.


During the week we've gone out to a variety of places as well.  We've been out for Italian, Indian, Thai, Western, and local cuisine.  We're even going out for a Canadian Thanksgiving dinner tonight (same kinds of food, different day).  Back in the States I don't think we would have been able to eat out so much, but here it is one of our few expenses with our place already paid for. 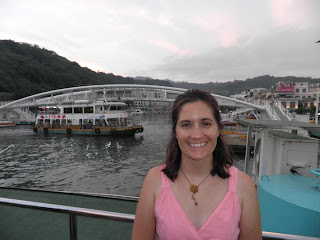 Getting to know the city we had a chance to walk around the Central Park last weekend.  Then last night we took a five-minute ferry ride across the harbor to Cijin island.  It was nice to rent a bike and ride around.  We got to check out the lighthouse and an old fort as well as some beautiful views of the city that they provided.  It was also nice just sitting and listening to the waves on the beach before going back and having some dinner and shaved ice with mango.
Posted by Unknown at 9:16 PM