After a quick three days Erin and I were ready to head out to Hong Kong for Thanksgiving last Thursday.  Well, almost ready.  We had gotten up early for our 8am flight, but as we reached the airport we realized we had forgotten a passport.  Fortunately we were able to reschedule to the next flight so we had time to go back home, get some Starbucks, the passport, and a little relaxation before our flight.  This was not Amazing Race.

Once in Hong Kong we were able to get a shuttle to our beautiful hotel where we proceeded to have a drink overlooking the harbor.  Before long we were heading across the harbour on a ferry and up Victoria Peak on a tram.  Even for a Thursday there were a lot of people, but we had reservations at a restaurant at the top for Thanksgiving Dinner.  The food was very fancy, but delivered the necessary turkey and mashed potatoes and a romantic setting to go along with it.  The evening air was so nice that we decided to walk down from the peak.  We didn't get too far on the deserted path though when we realized we had forgotten a bag of souvenirs.  Heading back up a porcupine crossed our path which made the return trip more interesting and gave us another incentive to take the tram back down. 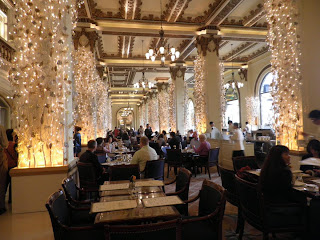 The next morning we got to talk to family as they were celebrating Thanksgiving.  It was nice to see everyone through Skype.  Eventually we got cleaned up and went out for some shopping.  While we saw a few things we liked we seemed to be constantly presented with the hip local fashion that is definitely not our style.  We moved on to the Peninsula for some fancy afternoon tea with cucumber sandwiches.  Once finished we tried our hand at shopping again, this time in Causeway Bay, but were again disappointed.  Shopping really isn't our thing. 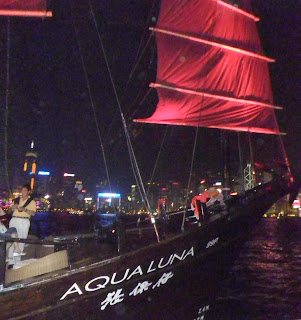 Our next stop was a ride on a traditional junk in the harbor while watching the light show.  The music was kind of hokey, but the view was excellent as we saw buildings from both sides of the harbor light up in time (roughly) to the music.  We finished the day at an amazing sushi place called Nobu.  It really typified Hong Kong for me as we had delicious sushi while overhearing some guys pitching a new technology to an investor at the next table over.  I think if it weren't for the tremendous amount of people and the high cost of everything we would enjoy living there in the future. 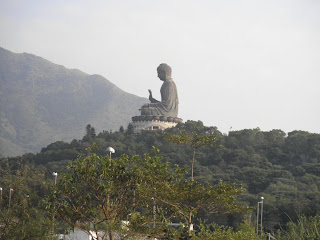 We got a full understanding of the crowds on Saturday when we went out to Lantau island to see the big Buddha.  We had decided to take the gondola to the remote village and monastery, but that also happened to be how everyone wanted to go.  What seemed at first to be a short line turned into a several-hour wait.  Once at the village we were rewarded with a parkour demonstration along with the majesty of the statue.  But then we had to wait once again to get on the gondola back down.  We ended up spending most of our day on the trip.  That night though we had a chance to see SoHo with it's long escalators, small bars, and narrow streets.  We found a great little Italian place for dinner to finish our day.

On Sunday, after one last walk along the harbour, I saw Erin off at the airport.  While she went back to Kaohsiung I was staying on in Hong Kong Monday and Tuesday for a conference on leadership in education and technology put on by Apple.  It was an interesting conference that really helped me see how technology can be integrated into teaching.  Plus we got to play with iPads and I got to meet other education tech people, so that was fun.  Of course it's meant spending the rest of this week catching up and I'm glad that it's the weekend once again.

It was a very enjoyable trip and I can definitely see Erin and I visiting again...as long as we can figure out when to avoid the crowds!
Posted by Unknown at 4:25 AM