It has been an exciting past week for Erin and I as we took our Chinese New Year vacation in Chiang Mai, Thailand.  With only a few days of break we wanted to make the most of them.  However, being one of the biggest travel seasons for the Taiwanese we couldn't get a flight out until the second day of our vacation. 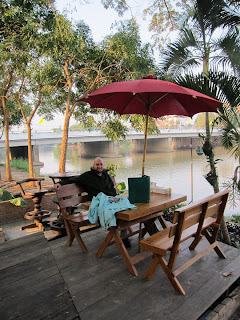 So after our first day off on Wednesday spent relaxing and catching up on work we flew out on Thursday.  Leaving around noon we didn't get to our destination until that night.  As we navigated through the Bangkok airport we saw many more Westerners and more enticing Western food than we're used to in Kaohsiung.  Arriving in Chiang Mai we were able to get to our guesthouse, a sparse (and inexpensive) place along the river.  We still had some energy so we went downtown and found a nice place to eat with a guy playing a guitar in the background.


After breakfast out by the river on Friday morning we were picked up for our main adventure for that day: riding a zip-line.  While we thought we were just going to ride a zip-line we soon learned that we were first going to see a waterfall, than get massages, then do the zip-line course before having a late lunch.  While each of these was very nice it seemed to be mainly a way to fill time while other groups did the main attraction.  It was all very organized and we enjoyed the company of our group who seemed to be comprised of mainly Americans. 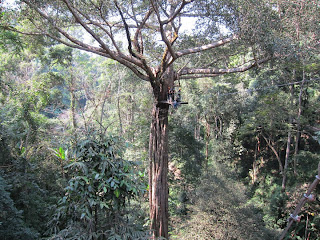 While the waterfall looked nice and the massages felt good, the zip-line course was definitely the highlight of the day.  While wearing harnesses we would each step out onto platforms built high up in the trees.  There, one of our guides would hook us up to a zip-line and then let us go as we glided to the another platform where the other guide was waiting.  I suppose that's your standard zip-line operation, but the attitude of our guides didn't seem all that natural.  There was a lot of joking and playing around as they shook the cables, pretended that something was wrong after a person had left the platform, and letting members push each other off the platforms.  I enjoyed it as they added something new to each leg of the course and kept the mood fun.  It probably helped that we were a younger group of people.  Getting back into town that evening we went out for some delicious Mexican food before doing a little shopping at a night market. 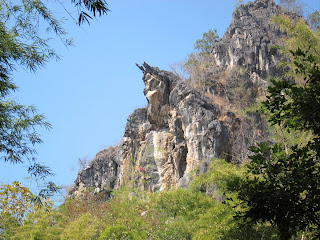 On Saturday Erin and I went our separate ways.  She had found me a rock climbing course which was her gift to me for my birthday.  For herself she found a place to get a massage and a pedicure in town.  I thoroughly enjoyed the rock climbing experience.  They drove me out with a couple of other people to a place called "Crazy Horse Butte" where we got instruction in top rope skills.  It was a technical course with a couple of knots, some new equipment that I hadn't encountered in the gym and several techniques for staying safe on a climb.  We spent the morning going over the techniques and practicing before stopping for lunch.  After lunch we practiced some more on actual climbing routes.  The butte provided a lot of fun climbs to try our new skills and I feel that by the end of the course I was feeling comfortable to go with someone climbing outside of a gym.


That night Erin and I got back together and went out to dinner at a really nice Italian place.  The food was delicious and the wine was up to date.  Once we were finished though I was exhausted and ready to go back to our guesthouse. 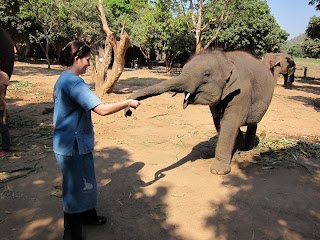 Our adventure for Sunday was a trip out to an elephant park.  For the months leading up to this trip we had both been looking forward to riding an elephant.  As we talked to people who had done it though we learned that there were many places where you get to ride, but you feel guilty because the elephants seem to be exploited.  Erin finally found a place online that seemed to balance our desire to ride with treating the animals fairly.  Once we got out there the owner explained how his park was different from many others and we learned about how they take care of the elephants.  It seemed very similar to a nice horse stable.  The elephants were held in captivity for the most part, but they were fed well, bathed, and looked after.  So we got to feed them and learn how to ride them bareback.  They also offered us the chance to help clean them in the pond, but we declined.  It was certainly a memorable experience, but at the same time it wasn't comfortable and not something I think we'll seek to do in the future.

Back in Chiang Mai we made in time to catch our ride out to our cooking class downtown.  While it seemed rather rushed the food we made was pretty tasty.  There weren't any basics covered.  It was all about chopping vegetables up, throwing them in the wok when told, stirring them up and then serving.  They prepared most things for us and then it was like they were reading from the nice cookbook that we got as part of the deal.  I suppose when so many people want to do it that's what one should expect.  Afterwards we went to another night market to do some more shopping.  We got a few nice things before calling it a night.


On our last morning we went downtown for a jog around the city's moat before finding a place for breakfast.  Back at our guesthouse we packed up and went out on the street to hail a taxi to take us back to the airport.  After waiting a while what presented itself to us was an elderly man on a small, sputtering motorcycle with a shoddy looking sidecar.  Not having seen anything else in that part of town we agreed on a price and took off.  The ride was a bit hairy, but we got to the airport and made it home safely.  Just one more adventure for the road!
Posted by Unknown at 4:11 AM No comments:

This past Friday was Erin's birthday.  The fun started that night when our friend Amy came over dinner.  As I cooked up some fish tacos the two chatted the night away even finding out that they had the same Myers-Briggs personality type.  It was nice to entertain and proved to be a relaxing evening after a full week of work.


As my gift to Erin I decided to surprise her with a trip to a spa.  After consulting our friend, Melinda, I reserved a room at a spa/hotel in Guanzihling, Taiwan and reserved a rental car.  Guanzihling is marginally famous for its muddy hot springs.  It's supposed to be good for your skin and one of only three in the world.  On Saturday afternoon we rode the subway up to the rental car place.  Once we found the place the agent was very helpful and we were soon on our way. 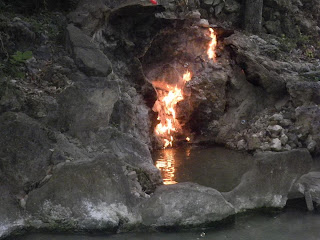 Along the way we stopped at an interesting attraction called "Fire and Water".  Apparently it is the site of a spring with natural gas in it so that as the water and gas reaches the surface a flame burns on the water.  The flame has been burning for over three centuries so there is a story that the spring is the result of a battle between a water tiger and a fire dragon.


Once we finally found our hotel and had dinner at a nearby restaurant it was time to check out the spa.  Rather than the mud pit we had been expecting they had a bucket of mud.  The point was to slather the mud from the bucket on your skin, let it dry out, and then rinse off in one of the large spas.  Apparently this is supposed to be good for your skin, but as it was cold out we didn't spend too much of our time outside of the spa waiting for the mud to dry.  Still, it was an interesting and relaxing experiencing.


On Sunday we drove back to Kaohsiung to take advantage of having the car.  Our first stop was Cheng Ching Lake which is a beautiful lake area somewhat far from where we live.  We took this opportunity to start a jogging program called "Couch to 5K" which includes a podcast that helps a person gradually increase their running potential.  It was pretty fun and the lake provided a beautiful location to start.  We then went to a store called "Hola" similar to Wheel&Barrow or Pier1 Imports so that we could get some lamps for our place.  Our place looks a little more home-y now.  Even though it was nice to have the car it was also stressful driving in the city traffic.  I think we'll keep with the walking and public transport.
Posted by Unknown at 8:55 PM 1 comment: