After our conference in Kota Kinabalu, Erin and I flew to Bali for the rest of our Spring Break.  While Bali was a beautiful island and the people were friendly we had some difficult times there.  When we first arrived we weren't prepared for the $25 visa on arrival.  We finally found some ATMs on the other side of immigration.  We had to give them our passports, go get some cash, get our passports back, get our visas, and then go back through immigration.  With a delayed arrival and this trouble at immigration we were glad that a driver was still waiting to take us to our hotel. 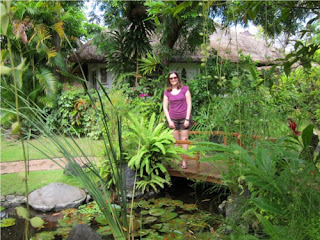 The next morning we awoke to our beautiful cottage and surroundings.  Within a walled area in Kuta, it was a serene retreat from the many hawkers and scooters on the narrow streets that dominate the rest of the city.  Breakfast was delicious in a similarly decorated courtyard.  Before long we were travelling out to the beach for some jetski action.  After having a great time on the jetski and a hot walk along the beach we had lunch at an authentic Balinese place which was very good.  After spending some time back at our cottage we went out to see some temples and get a drink at a fancy bar on the sea cliffs.  Unfortunately, with traffic we were only able to get to the bar.  It was a beautiful and glamorous place for dinner and drinks. 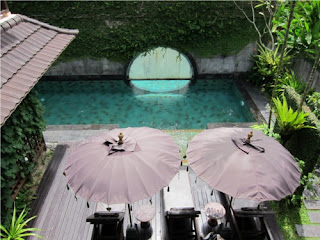 On Wednesday we slept in and relaxed at the cottage before heading up to Ubud in the mountains.  We had a very nice villa in the city which looked amazing.  That night we met up with our friends from school to catch up on our trips and then went out to see a traditional dance.  It was a very interesting dance with expressive facial and hand motions. 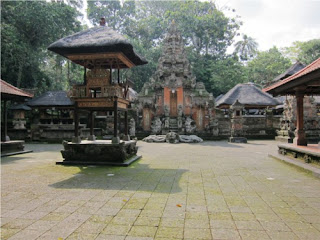 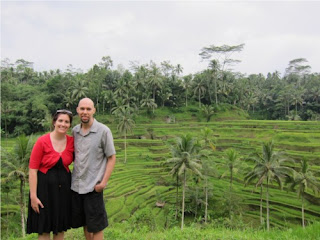 Next morning we got up and went for a walk around the area.  Just down the road from our villa was Monkey Forest Park with a ton of monkeys.  At the center of the park was a temple that could have been out of an Indiana Jones movie.  It was very cool seeing all of the statues and once outside of the city center we felt like we were in a more natural setting.  That afternoon we got a guide to take us around the area.  It was nice to see a nearby elephant cave and rice terraces.  However, as we were going around we often felt like we were just walking dollar signs to people who were constantly trying to get us to buy things.  Everyone was very nice and it was nice that so many spoke English, but it never really felt sincere.  It probably didn't help that we were in the main tourist areas.


On Friday we got up for another walk outside of Ubud which was one of our most enjoyable experiences.  The area is so verdant and peaceful.  That afternoon we went down to the beach towns.  Again we were restricted by traffic (and rain) to get out to see one of the famous temples.  Looking back we spent a lot of time in a car and got to see a lot of the island that day. 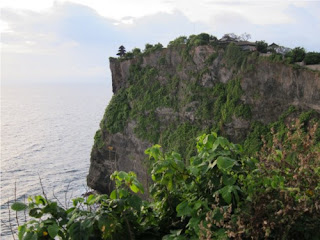 Saturday was our last full day in Bali and we made the most of it.  In the morning we went out for some snorkeling and got to see some really cool fish and coral.  After a delicious Italian lunch and gelatto Erin got a pedicure while I had a beer at a bar by the beach.  That afternoon we finally got the traffic situation worked out to go to the Ulu Watu temple on the top of a sea cliff.  Once again there were a ton of monkeys as we watched the sun set.  We then went to Jimbaran bay to have fresh fried fish right out on the beach as a mariachi band played.  It was a nice end to our time in Bali.


Early the next morning we were back in the airport to head out.  It was a stressful situation as our flight seemed to be bumped up 20 minutes and we were once again hit with a fee with no nearby ATMs.  We made it out okay but our trip taught us several valuable lessons.  We may have slacked off recently in terms of planning and being aware of airport details.  We enjoyed Bali and would go back, but we would probably go to the less touristy areas.  Live and learn.
Posted by Unknown at 7:04 AM