Chicago is for Food Lovers 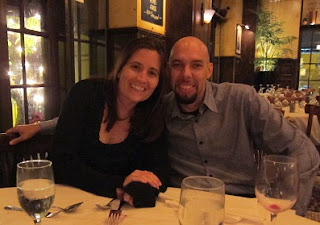 The thing I think Erin and I enjoy the most about being back in the US, after seeing friends and family, is the food. While we've been able to find good food in Taiwan we have missed the vast diversity of quality food that is available in the US. That diversity and quality became very apparent when we visited Erin's brother, Andrew, and his girlfriend, Sara, in Chicago.


After arriving and putting our stuff down we went with Andrew to get some delicious Thai food for lunch.  We then went out to meet with our friends from California who had been touring Chicago on vacation.  We met them out on the Navy Pier as they were finishing up a short cruise on a pirate ship in the lake. That night we met up with a friend from Illinois that was in town for a few days with her baby.  We had dinner at a French restaurant called Mon Amie Gabi.  The steaks we had were delicious and we ended up sitting by "Meredith" from "The Office". 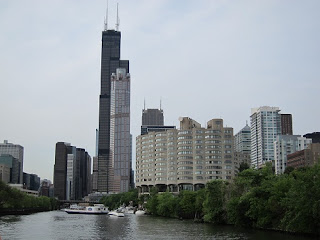 The next morning Andrew and Sara took us to a very good croissant place near their apartment. Erin and I then went downtown and eventually found "Fulton's on the River" for lunch with friends from Illinois. That afternoon we took an architectural boat tour of the city. It was very interesting to see the range of architectural styles and learn about how they were developed in the city.  Upon finishing the tour we met Andrew and Sara at the top of the John Hancock building for some drinks as the sun set.  We finished the day back at their place as they cooked us some delicious pizzas. 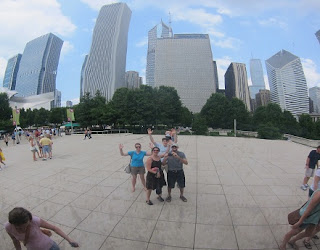 On Saturday we all went downtown for brunch at XOCO, a famous Mexican restaurant from chef Rick Bayless. With Mexican hot chocolates and churros we were all very happy with the food. Of course with all the food we were eating we needed to walk around so we went to Exposition park where they have a huge silver "Bean" sculpture. We then set off for Erin's, Andrew's, and Sara's Alma Mater, Northwestern University. There we got giant cookies from "Al's Deli" and walked around the campus while the three reminisced on their school days. We then went for dinner at Pita Inn for some good Middle Eastern food. Later that night we went out to the Kingston Mines Blues club. It was a great, relaxed atmosphere for hearing some really good blues musicians and a wonderful end to our stay in Chicago.


Sunday morning we were up early as Andrew and Sara thankfully drove us to the airport. The company had been wonderful and the food had been so delicious. After arriving in Denver later that day we learned that Andrew had proposed to Sara.  We expect that they'll be getting married in Chicago so we're looking forward to going back out there for the wedding (and some more of that great food of course).
Posted by Unknown at 12:08 PM