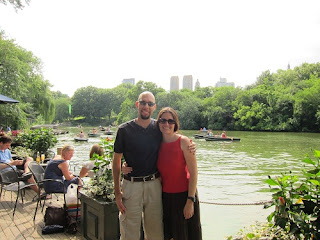 After spending time with all of our friends and family with babies Erin and I spent some time on our own in New York City for our second anniversary.  We started off the day with drinks at the boathouse in Central Park. It was a nice day out and we enjoyed seeing the diversity of people. After lunch in the park we walked back to our hotel to prepare for the evening. That night we went out to a wonderful tapas (Alta) restaurant followed by a small jazz bar that we had been to last time we were in town (The Bar Next Door). The bar proved to be just as cozy and romantic as it was before and a nice finish to our first night of anniversary. 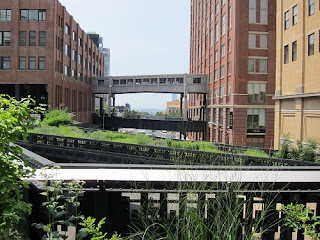 Not content to have only one day to celebrate our anniversary we continued the celebration for our entire stay in New York. On the following day we made our way to the Highline Park. We had recently read about this new park on the southwest side of Manhattan that had used to be a set of elevated train tracks. Instead of having them torn down after disuse the community formed a group to transform the tracks into a park. The result was stunning as we walked among shrubs and bushes while looking out on the streets of New York. After lunch we decided to forgo the usual museums and instead visited the Sex Museum. While the museum had some interesting exhibits on sex in cinema, in comics, and in the wild we were torn between their candidness and our sense of sexual norms.


That evening we went out to see the play, "A Bengal Tiger in Baghdad Zoo" starring Robin Williams. It was an interesting existential play with Robin Williams playing a foul-mouthed tiger amidst the war in Iraq. While the actors were all very good, Erin and I felt the story lacked definition at the end. We finished the evening at a delicious Cuban restaurant (Victor's Cafe 52). Though they didn't have much of the seafood on their menu due to a large party that night, the food we had was delicious.


For our final day in New York Erin and I went back to Central Park to read and relax. It was nice to just sit and watch the many different people walk and ride. Again we had lunch in the park, but in comically New York fashion we were seated very close to two ladies discussing intimate details that Erin and I could have done without hearing. After a stroll back through crowded Times Square we were packing up and heading out to Newark for our flight the next day. Among the many people, the delicious-but-high-priced food, and wealth of events Erin and I concluded that we love visiting NYC, but I don't think we would want to live there. It certainly is a wonderful anniversary location.
Posted by Unknown at 12:00 PM