As I mentioned in my previous post, Erin and I have been visiting babies and their families this summer.  It has been fun and exciting to see all of them, but also a little tiring as our schedule has meant that we haven't stayed in the same place for more than three days.


After Atlanta we flew to Baltimore for another difficult travel day.  Since we're flying American Airlines for this whole vacation we had to fly from Atlanta to Chicago and then Chicago to Baltimore on Monday (6/20).  The only problem was that once we got to Chicago we saw that our flight to Baltimore was cancelled and there wouldn't be any more until the next day. After some scrambling we were able to get an agent to book us on a United flight leaving out later. We made it okay into Baltimore, but our bags didn't, so we had to wait until Tuesday for United to deliver them to us. 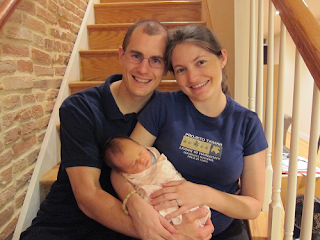 Once in Baltimore our days took on some conformity as we helped Amy and Kevin with their 3-week old, Nora.  We would get up around 6:30 AM in the apartment that Erin's parents had booked for the month for visiting family to stay in.  Out by 8 AM we would get chai tea lattes from a favorite coffee shop for Amy and Erin.  We would spend the rest of the day at Amy's and Kevin's while Erin helped take care of our niece and I would cook the meals.  It was nice to be able to relax for the rest of the day without worrying about having to get someplace.  During that time we enjoyed taking her for walks around the neighborhood in her stroller.  I also enjoy cooking so I'm glad we could help out in that way.


Erin and I could see how it is a full-time job taking care of a newborn baby.  They need to be fed every three hours and it often takes an hour to feed.  The schedule varies a little at night, but it doesn't leave more than a few hours for sleep.  In the past Erin had thought how nice it must be to get maternity leave as a vacation from work, but now we could see just how vital that leave is.  Of course, it gets easier as the baby gets older and we're looking forward to the time when Nora is able to start talking and sleeping through the night.


On Friday it was time to go as Erin and I took a bus from Baltimore up the coast.  Had we planned better we would have taken the bus to Newark, but instead we took the same route we had done last year getting on the bus to New York and then taking a train back down to New Jersey.  After being delayed, the bus ride was long and hot.  We eventually made it to Stephanie's and Shawn's place in New Jersey late in the day as they cooked up some delicious grilled clams and scallops. 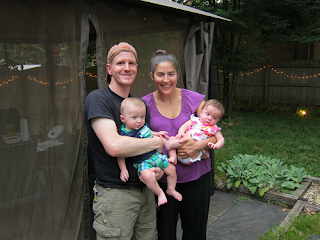 If we had thought taking care of one baby was a lot of work we saw with Stephanie and Shawn how taking care of twins means twice the work at the same time.  Last year Erin was mentioning how twins would be good since you could have two kids and get all of the work out of the way at one time.  The problem is that you have to do twice the work (twice the feedings, twice the changings) at the same time which looks to be exhausting.  Shawn and Stephanie seemed to be managing well with their six month olds, but were also happy on Saturday when they dropped off the twins with their aunt and uncle so we could enjoy some baby-free time.


The day was definitely geared towards relaxation as we started off with a delicious tea place.  From there we went to Queens for a stay at Spa Castle.  This is a Korean place where we paid a set fee to get in an then could spend as much time as we wanted in the numerous spas and saunas.  It was uncomfortable at first with the same-sex, nude changing areas and the rule that we had to wear gender-specific uniforms.  Erin and I felt like we were back in Taiwan with the same sense of uncertainty of what to do.  We eventually were able to relax and enjoy the accommodations before heading into NYC for dinner at a vegetarian hummus place.  On Sunday Erin and I had a chance to catch up on emails while Shawn and Stephanie picked up the kids.  We spent the rest of the day putting up a canopy out in their back yard and having a small BBQ.  It was nice to share the weekend with them before moving on.


As Stephanie drove us to our hotel in NYC for the next leg of our trip I thought about all of the babies we'd seen. All of them we're very cute and all of them demanded a lot of time and energy. I'm glad we got to see them and got to see our friends and family in this new stage in their life. As cute as the babies were, the amount of work and the sacrifices that they require didn't exactly make Erin and I want to rush out and have kids right away. We could see how rewarding having kids was, but for now it's nice to be an aunt and uncle so we can enjoy them (and potentially spoil them) in small doses. Whatever our decision in the future is though, I'm glad we got a chance to visit Babyland.
Posted by Unknown at 9:37 AM