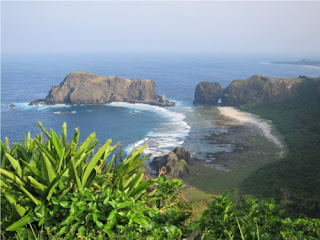 With the start of classes just a week away Erin and I decided to spend this past weekend out at Green Island. This relatively small island to the east of Taiwan had been on our list of places to go all last year, but we were often thwarted in our attempts to go. Getting there is a bit of a trek.


On Friday we took the subway to the train station to catch our train out to the east side of Taiwan.  We had learned from previous attempts to purchase our tickets early in order to get a seat during this popular season. After the 2 1/2 hour train ride we made it to Taitung where we tried to figure out the bus schedule to the harbor. After being told we would need to wait 40 minutes we decided to just take a taxi. The taxi driver hurried us to the harbor so that we could book tickets on the ferry that happened to be leaving mere minutes after we arrived.  Fortunately we had taken our motion sickness pills an hour before, but we still grew rather nauseous on the 50 minute boat ride.


Upon arriving on the island we were met by several people renting scooters and we were soon riding around the island.  Being a somewhat small island it didn't take us long to get to our hotel and check in.  After dropping off our bags we were back on the scooter and cruising around the island.  About 30 minutes later we had circumnavigated Green Island and were back in our air conditioned room relaxing.  Well, all the travel must have worn us out because we soon went to take a nap and didn't get up again until the next morning.


Saturday morning we tried to go out for some snorkeling, but soon found difficulties.  The day before we had seen large groups of snorkelers in wet suits and life jackets being led out past the small waves holding on to life preservers. We just wanted to rent a mask and some fins to see the reefs that Green Island is locally known for.  However, we tried four different places and none of them would just rent us the gear (or they didn't understand what we were asking). We finally ended up just going to the beach and wading in the cool water. 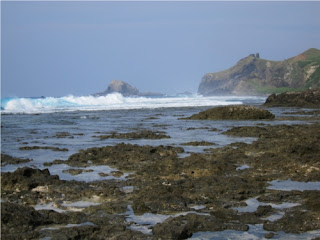 Later that day it was Erin's turn to ride the scooter as I sat on the back. We stopped several times to take pictures of the beautiful coastlines and rock formations.  The formations in the picture above are called Pekingese and Sleeping Beauty for their resemblance to a dog and a woman laying down. Throughout the day we would take time out of the heat back at our air conditioned room to relax and read before heading out again.  That night we even decided to get adventurous and had dinner at a cook-it-yourself BBQ place where we were given a table with a small fire pit in it, an aluminum foil wrapped grill, and directions to a large fridge with tubs of raw meat and vegetables. While we were able to cook a couple of things the experience left something to be desired and the heat of our little fire was more than we could stand for very long.


On Sunday we were up early again as a result of lingering jet lag so we made our way to the island's hot springs. Said to be one of only three salt-water hot springs in the world we were glad to get there before it got to packed.  Unfortunately the pools closest to the ocean were closed for repairs, but it was still a nice outdoor hot spring.  Before too long it was time to make the trek back home.  After scooter, boat, car, train, and subway we were exhausted. I'm glad we got a chance to see Green Island, but I feel like we can cross it off our list of places to go in the future.
Posted by Unknown at 7:28 AM