I've had a hard time writing lately as there doesn't seem like much has happened over the past few weeks to write about.  The stifling heat and humidity has kept Erin and I indoors for much of our days.  We're also trying to eat healthier which means more cooking at home instead of going out for dinner.  We have had a chance to go out with our friends from school on several occasions though and there has been some interesting weekends.


Two weeks ago we were preparing for Typhoon Namadol which was heading our way.  It had been strong enough to call off school on Monday, but by the time it reached us it had weakened to a tropical storm.  Neither one of us were complaining about not having to go in to school that day though. 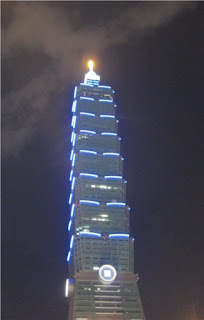 This past weekend was Moon Festival and so we again have Monday off.  We took advantage of this by going up to Taipei on Saturday.  Our friends from school had introduced us to a TEDx talk happening up there.  It was an interesting afternoon session which included presentations by six speakers discussing the theme of "A road less traveled".  There was a chef that treated cooking like art, an artist who drew the backs of people's heads, a writer who placed bronze plaques about his parallel world at different sites around the real world, a rice farmer who had gone to school to be a lawyer, a disaster architect who nonetheless disliked that title, and a musician that organized concerts for his friend that was murdered in Pakistan.  There were many times when I was confused because four of the six spoke Chinese which was translated.  Still I'm glad we went as it was a change from our daily routine.  That night we went out to Gordon Biersch for some good American food and then stayed the night in Taipei.


The next morning we relaxed in the hotel room before going out for Mexican food for lunch.  That afternoon we ended up going to a concert organized by the musician we had heard speak the day before.  The music was good, but I think I enjoyed more the people watching.  With the Taipei expat community on full display there was far more diversity than we usually see in Kaohsiung.  Before long though we were heading back South on the train.  Back to the routine.
Posted by Unknown at 1:02 AM 1 comment: