Today is Double Ten Day in Taiwan which celebrates the overthrow of the Qing Dynasty and the establishment of the Republic of China.  We got a three day weekend and took the opportunity to go back up to Taipei.  We've found it very nice to be able to jump on the high speed train and be up there in about 90 minutes.


As soon as we arrived and were in our taxi to our hotel we saw wave after wave of aircraft fly over.  It was exciting to see the different helicopters, planes, and jets.  We checked in at the Tokyo International Hotel with a very friendly staff but we only stayed long enough to drop off our bags.  We were soon off for lunch at a Vietnamese restaurant we had enjoyed in the past.  We thought we might be late, but they sat us anyways and served a good meal.


After lunch we took the train out to the hills around Taipei for a ride up the gondola.  It was very nice to walk around the terraced fields and tea houses while the sun set.  By the time we started back towards the gondola it was already getting dark which made navigating some of the trails difficult, but it was an exciting adventure.  Down at the base of the gondola we stopped to view a water show (with lights, music, and jets of water).  Though we had to wait 30 minutes for the show to start we were treated to a random fireworks display nearby as soon as we sat down.


Back in the city we went to dinner at Gordon Biersch for some western-style food.  As we waited for a table we were able to stroll around a mall featuring a person dressed like a large cat and a group of dogs trained to lie down next to each other for a very long time.  Dinner was good with a delicious desert. 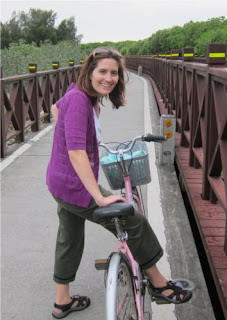 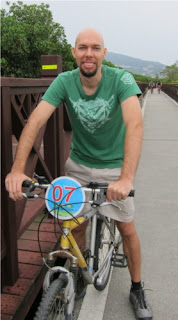 The next day we got up late and went to brunch at a place called "Grandma Nitti's".  The decor was nice, but the food was a little off.  We got on the train and went out north of the city to a place called "Danshuei" where the Taipei rivers drain into the sea.  Though it was raining a little we went ahead with our plans to take a ferry across the river and ride bikes around. It turned out to be a nice ride even though there were a lot of people.


Our day got more exciting as we took the ferry back across the river and somehow got stuck.  We couldn't tell what was going on, but the engines were running and we weren't moving.  The captain seemed to try a variety of maneuvers to get unstuck and there was even another ferry that came and gave us a bump.  When the crew had many of us move to the front of the small ferry some people seemed to get worried and had put on life jackets.  But the captain managed to get unstuck somehow and get us to our destination.


To relax from the excitement of the day we found a wonderful little hot chocolate place.  The hot chocolate was delicious and the atmosphere was cozy.  Back out on the streets the crowds were starting to grow thick.  There were some people in pirate costumes doing a dance with a float behind them, but most people were milling around the shops.


We got back on the train and came back home Sunday night.  It was fun to get out of Kaohsiung for a while and see many things that we don't have here.  It was a little exhausting though and I'm glad we have today to catch our breath before going back to work tomorrow.
Posted by Unknown at 2:09 AM