One of the things I really enjoy about living abroad is the ability to experience multiple cultures, even those of countries we're not currently living in.  I've found that living as a foreigner in a different country often means that you get to know other foreigners more than the locals.  As English speakers we naturally tend to gravitate towards other English speakers.


So it was last Monday night, as the Republic of China (Taiwan) celebrated it's 100th anniversary, Erin and I could be found at a restaurant/bar enjoying Canadian Thanksgiving.  Similar to a Thanksgiving meal in America; we enjoyed turkey, stuffing, ham, mashed potatoes, and finished off with some pumpkin pie.  We even had leftovers for lunch the next day.  Looking around at the Western decor and fellow Westerners enjoying the feast I could imagine being in North America. 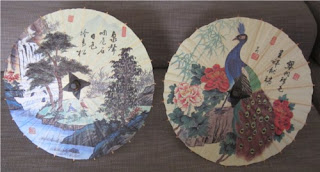 On Saturday this past weekend we were back to local Taiwanese culture as our friend took us to Meinong, a town in the foothills not far from Kaohsiung.  We started with a delicious lunch at a place that served local, naturally-grown food.  The style was more typical of the indiginous tribes than the fried food we often see in the city.  After lunch we went to a shop where they hand-make and paint paper umbrellas.  There were many beautiful designs in various shapes.  To finish out our trip we visited a local potter.  We're hoping that the pottery and paper umbrellas will provide some character to whatever place we get back in Colorado.


For Sunday afternoon I was off to celebrate some more foreign culture as another bar had a satellite link to the semi-finals of the Rugby World Cup.  My friend, Andrew, had invited me to watch his national, New Zealand team: the "All Blacks", versus the Australian "Wallabies".  It was the first time I had seen a full rugby game and I enjoyed how fast-paced it was.  It helped that the team we were cheering for ended up winning.


I suppose that we could have enjoyed Canadian Thanksgiving and the Rugby World Cup in the US, but I doubt we would have known about them.  Maybe now that we know about them we'll be on the lookout for opportunities to enjoy them back in the States.
Posted by Unknown at 8:32 PM