Erin and I have been getting a lot of bicycle riding in lately. Two weekends ago we rented bikes and rode along the river. The city makes it fairly easy to rent bikes out of their numerous automated bike stands so we were able to get the bikes near where we live, ride downtown, and leave them at another stand there. While downtown we enjoyed a western-style dinner and walked around an artistic section of the city. It was a good evening to get Erin's mind off of the day-long parent teacher conference she had the day before. 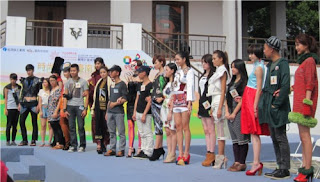 This past weekend we went to Tainan for some more cycling. Tainan is the next largest city North of us about an hour train ride away. It used to be the seat of power when the Dutch ruled and still has many buildings from that era. We started with a walk around one of the old Dutch forts. Surprisingly, as we arrived we saw that they were holding a small fabric expo and were treated to the tail end of a fashion show. 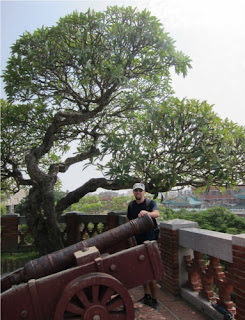 After the fort we walked over to an old tree house which turned out to be an old salt warehouse that had been overgrown with banyan trees. The trees gave the place a relaxing feel. Their shade was a welcome relief from the surprisingly hot day.


As lunch time was soon approaching we rented some bicycles and rode out to where this quirky cafe was supposed to be. The crazy construction of driftwood and glass was there, but they were doing work on it and not serving food. Fortunately there was a cafe next door. Though it was serving typical Taiwanese food we found some palatable dishes before moving on. Across the street was another Dutch fort with an array of massive cannons. 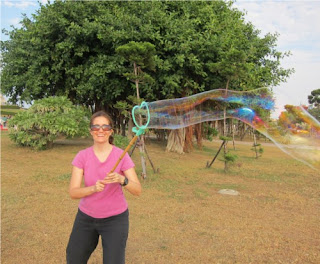 Before long we were back on the bikes and heading back to where we rented them. Along the way though we spotted a massive amount of bubbles. There were people with huge saucers of soap and sticks with rings on the end. Joining the fun we got our own set. We would dip the rings into the soap and let the breeze blow huge bubbles and tubes. It really made our day after missing our expected lunch. 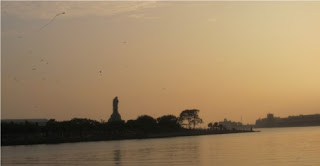 After returning the bikes we took a taxi back into the main part of town. There we tried to get a melon drink for Erin, but with no signs in English I fear we got something else because it just tasted like sugar water. We then went to the Confucius temple, but didn't see much as it had gotten dark at this time. We finished our trip with dinner at a Greek restaurant which also had good mango margaritas.


It was nice to get away for the day and see a different city. Looking through the guidebook it seems we've done just about all there is to do in southern Taiwan. It will be nice later this month to get away to Singapore for Thanksgiving.
Posted by Unknown at 5:49 PM