Things you learn as you get older

It was my birthday this past weekend and to celebrate Erin and I took the train up to Taipei. We had a great time mainly because of lessons we have learned over the years and would have had an even better time if we had learned some things that we're still working on.


First off are the everyday things that help us get around in the world. As our second year in Taiwan we find things much easier because we've done them before. We've been up to Taipei several times now and so it has become and easy and enjoyable experience to get on the train and escape for the night. 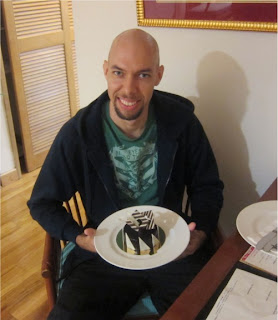 Having tried many different hotels I think we've found one that tops the rest with The Riviera Hotel. Shortly after checking in they called up to confirm it was my birthday and say they had a surprise. Without either of us having contact the hotel they noticed it was my birthday and brought up a chocolate cake. This act, along with the free western-style breakfast and internet, has secured them at the top of our list when we go back.


When we went out that night things got a bit more difficult as we learned that we still need to work on writing down addresses and asking for directions. We tried to get to a wine bar, but couldn't find it and stopped instead for a glass at an Italian restaurant. Later, when we tried to get to our intended dinner restaurant the taxi could only get us to the neighborhood leaving us to walk around in the rain before we could find the place. We had a similar problem directing the taxi back to our hotel when we were finished. 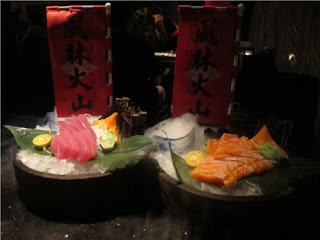 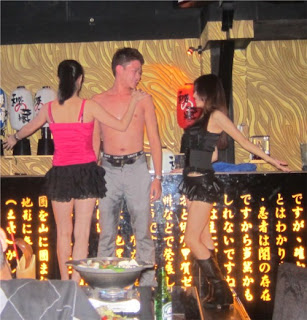 Our dinner turned out to be an interesting event where years of experience finally lent themselves to better judgement. We were having dinner at a place called "Ninja" which was decorated in a feudal Japanese style with women dressed as ninjas. The food was okay (sushi, etc.) and there was a fun little waterfall gate that opened up when you said the secret password "ninja". The most interesting part was when they encouraged us to sit closer to where they were going to have a dance. That was when two women with little clothing started dancing and soon were beckoning some of the patrons to come join them. Knowing better, I declined to join them, but another young man wasn't as wise. At first it seemed to be good fun as the two women were dancing with him up on stage and started to take his clothes off. By the end though they were pouring ice water over his head and ice down his pants. He took it like a sport, but also seemed very red with embarrassment. Live and learn. 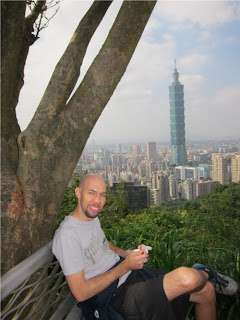 After the difficulties of getting around Saturday night, Sunday was a sunny new day.  After breakfast we went down to a store that stocks western-style food and packed for a picnic. We then found a trail up one of the nearby hills. The trail was steep, but we kept at it and before long we were rewarded with a beautiful view of the city while we had our lunch.


We then hiked back down to a nearby mall where they always have a wide variety of entertainment. There were various street performers and even a small half-pipe were they let me ride a bike around. After all the steps and walking on the trail we were glad to sit down for a movie (Tower Heist) and dinner (Gordon Biersch). As we made our way back home we made a key insight to birthdays and celebrations. 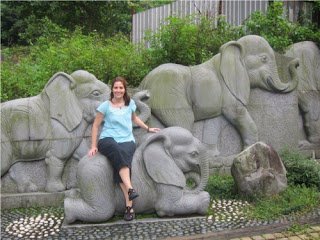 I often don't like to put too much emphasis on my birthday because it can lead to unrealistic expectations. Erin loves to celebrate birthdays and anniversaries often spreading the celebrations out over several days. What we came to realize is that this spreading out of celebrations provides more opportunities to meet higher expectations and have a great time.


Of course, the most important lesson I've learned over the years is that events are best celebrated with the people you love. I want to thank everyone for all the nice birthday wishes and especially, Erin, for being a wonderful wife.
Posted by Unknown at 6:57 PM