Home for the Holidays

This year for the holidays Erin and I made the long flight back to Denver. Making the flights seem even longer was the lack of seat-back TV's that we have come to expect on international flights. I think we'll avoid flying long distances with United in the future. Once we got back to family though it made the long flights worth the trouble. 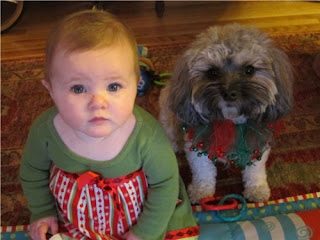 We started our visit with Erin's parents, Mike and Susie, and their cute dog, Dante. Erin's brother, Andrew, and his fiancee, Sara, soon joined us.  The next night after dinner at the artfully decorated Beatrice & Woodsley Erin's sister, Amy, her husband, Kevin, and their 6-month old daughter, Nora, joined us as well. From then on it was a cuteness contest between the baby and the dog. Even though she was sick (as most of us were or would be) I think Nora won and Dante had to battle for attention. 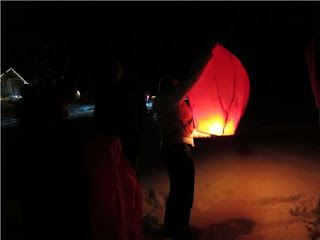 On Christmas Eve we had a wonderful home-cooked meal compliments of Andrew and Sara. After dinner Erin and I presented everyone with an activity we had brought back from Taiwan: Chinese Lanterns. These were paper balloons with flammable material suspended at the base. We prompted everyone to write down what they were wishing for in the coming year. We then took the balloons outside and lit them. The balloons filled with hot air and gently lifted off into the night sky taking our wishes for the New Year with them. 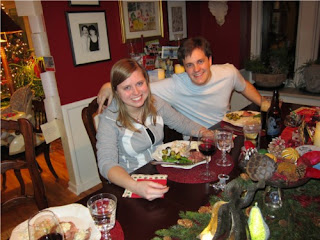 Christmas morning found us opening presents and talking to family. Though Nora wasn't old enough to open her presents by herself she certainly received the lion's share. Dinner that night was another wonderful home-cooked meal, this time coming from Susie's cookbook. We finished the night with a game of dominoes.


On Monday, the day after Christmas Erin went with her family for pedicures and then we all went out to a Vietnamese restaurant for lunch. 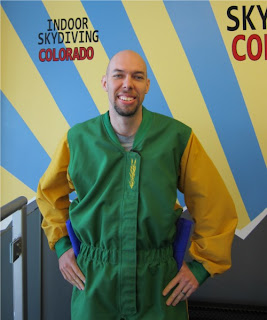 While Tuesday was a relaxing day to catch up on emails, Wednesday proved to much busier. As a birthday gift Erin had gotten me some time at Denver's indoor skydiving building. After a brief introduction our instructor had us suited up and ready to get in the vertical wind tunnel. I spent my first two minutes trying to remember my previous sky-diving experience. When it was time for me to go again for another two minutes I was ready to do some basic manuevers like turning, going up and down, and going back and forth. Later that night I went out to join our supper club at Duo Restaurant in the Highlands. Unfortunately Erin couldn't join me as she was going to see "West Side Story" with her family. It was unfortunate she couldn't make it to experience the wacky gift exchange we did, but she enjoyed the musical.

On Thursday we had to say goodby to Erin's family as my parents, Karen and Gary, were flying in and we were going to stay with my aunt and uncle, Janet and Reynold, for their stay.  It was hard to say goodbye knowing we wouldn't see some of Erin's siblings and our niece until Andrew and Sara's wedding in September. Still, it was great to see my family and have a wonderful spaghetti dinner fixed by Janet that night.

On Friday Janet had reserved a table for afternoon tea at the Brown Palace.  The hotel is beautiful and the tea and scones were delicious.  Later we went out to dinner at a great place in downtown Littleton called, Terracotta.  On Saturday it was much the same except that Erin and I joined our friends Pete and Leah for dinner at the Wash Park Grill. We all then went over to join our other friends, Rachel and Cameron, at their house. It was nice to talk and catch up with them.


We started the New Year on Sunday with more relaxing time with the family.  This included playing Reynold and Janet's Wii along with some dominoes. 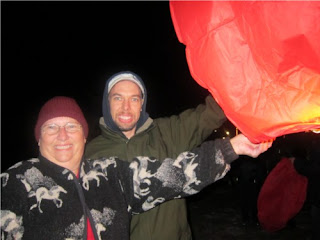 On Monday Erin and I got to meet with friends around town. That night Erin and I cooked my family a nice dinner of shrimp and tilapia before sharing the Chinese Lantern experience once more.


On Tuesday Erin and I drove my parents out to the airport for their flight back to California. We also took the opportunity to try to get some things out of storage that we would need in Taiwan. That night it was my turn to treat Erin to a surprise. We started out with dinner at the 9th Door Restuarant, a favorite tapas place downtown. We then went up to the Omni Interlocken Hotel in Broomfield. It was a nice hotel to stay at.


The next day the surprise continued as I got Erin an early birthday gift of a hot stone massage at the spa attached to the hotel. So she wouldn't be alone I went with her for my first hot stone massage. It was nice, but probably only something I would do rarely. We spent much of the afternoon running errands and preparing to leave. That night we went out with Erin's parents to the Sushi Den.


Early the next day Susie drove us to the airport for our flight back to Taiwan. As I type this we are once again on a long flight with limited entertainment options. It is a grueling process, but it was definitely worth it to see our family.
Posted by Unknown at 2:02 AM 1 comment: