Over the past two years I have been working on a pair of engineering programs for a group of water gate manufacturers.  With the help of a veteran engineer as the voice of the customer I created these form-based programs to help design a specific water gate and gate hoist.  The two programs were very similar in their functionality including:

Since I was working on a Linux (Ubuntu) machine and the program was needed to run on Windows desktop I opted for Java SWT to be able to compile versions for both operating systems.  Using Eclipse Plug-in Development for a framework allowed me to work in my preferred IDE while providing a number of desktop components out of the box.  Wrapping the whole thing up with an NSIS installer/uninstaller made for easy distribution.
Posted by Unknown at 4:37 AM No comments:

Email ThisBlogThis!Share to TwitterShare to FacebookShare to Pinterest
Labels: professional

Even though Erin and I were only back at work for two weeks it was already time for another vacation as the Lunar New Year came early this year.  Despite the crowds we had decided last year to travel to Vietnam and Cambodia.  We only had one week off though so we were going to be specific about what we visited.  First stop was Vietnam to see Halong Bay.


On Saturday morning we got up early for our flight to Hanoi, Vietnam.  It wasn't until I double-checked our itinerary that I realized that we had booked business class for our entire trip.  Thinking back I feel it was the only thing available, but it explained the high cost of our tickets.  In any case it was a welcome surprise as we got access to the business lounge before our flight and got the nice, wide seats on the plane. 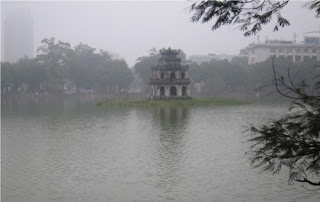 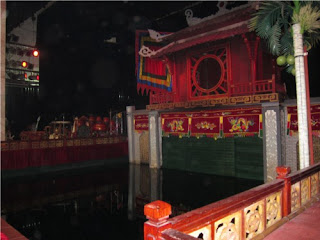 We arrived in the cold and gray of Hanoi noticing the dull, utilitarian, communist elements of the airport.  Fortunately we had contacted our hotel to pick us up so we didn't have to deal with any shady taxi drivers.  Our hotel, The Hanoi Moment Hotel was very accomodating throughout the trip and let us check in early so we could get some rest before heading out on the town.  As it was the weekend before the New Year the streets were packed and there were flower markets all around town. We found a wonderful ice cream shop for a snack while walking around the idyllic Hoan Kiem lake.  After some souvenir shopping we went to see a very nice water-puppet show.  With all the people in town we had a hard time getting in to a place for dinner, but eventually found a place with some space. 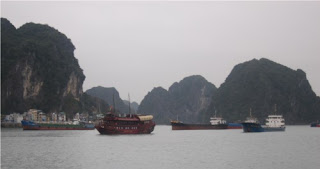 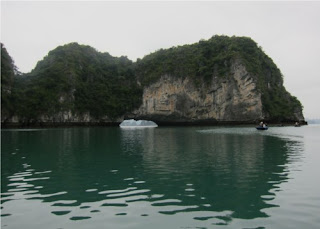 On Sunday we went out for a cruise on Halong Bay.  After a four-hour shuttle ride we checked in and boarded the ship.  Our first stop in the beautiful bay was a floating village where we were guided around by local row boats. It was astounding to think about how the people lived their lives on the water as we were taken to the town's school.  Our next event was a short cooking class before dinner.  Erin and I were pretty exhausted after that so we retired to our cabin, but others stayed up to celebrate the new year. 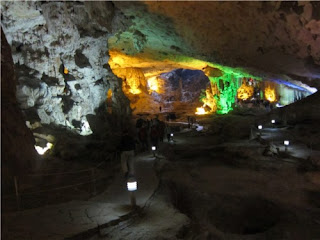 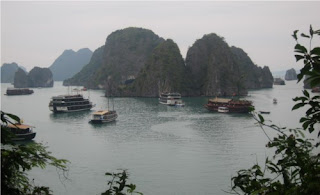 On the next day, the first day of the "Dragon" new year, we were treated to a trip to a magnificent cave.  The geography of the area made our trip back to the dock spellbinding.  However, we were soon back on the shuttle heading back to Hanoi.  The streets were far less packed as we got back in and checked back in to our hotel.  We still had a hard time finding a place for dinner, but soon discovered some delicious Italian food. 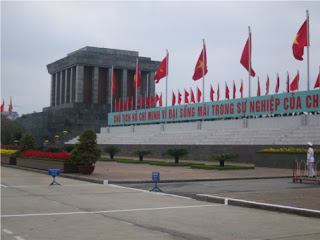 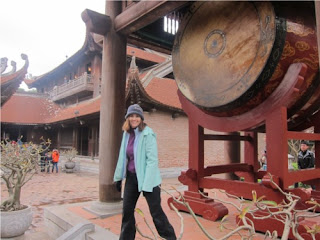 Monday morning we spent the day walking around Hanoi looking at the various sites.  From lake pagodas to Ho Chi Minh's Mausoleum it was all very interesting to see.  We just wish we could have been there when it was warmer.  We finished our sight-seeing at the temple of literature which contained a number of stone turtles carrying tablets of former Vietnamese scholars.  It was nice walking around the streets of Hanoi, but it was soon time to head back to the airport and fly off to Cambodia.  By that time we were looking forward to a warmer climate and some sun!
Posted by Unknown at 3:21 AM 1 comment: