After a cold couple of days in Northern Vietnam, Erin and I were off to sunny central Cambodia to see some temples.  Flying in to Siem Reap we arrived in one of the nicest airports we've ever seen.  Getting through immigration and getting our stuff was a breeze.  There was even a tuk-tuk driver waiting there to take us to our hotel.  The ride into town was nice and the hotel staff were very accommodating.  It didn't take long for us to settle in, change into cooler clothes, and head out for dinner.  After some walking around we found a good Cambodian place to eat which let us try a variety of meals for not very much money. 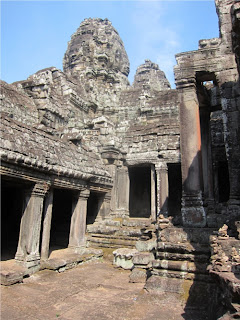 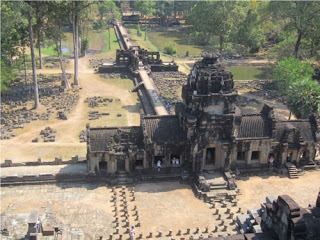 The next morning after breakfast and booking our activities for the rest of the week we hired a tuk-tuk driver to take us around to the different temples for the day.  The main temple of the region is Angkor Wat, but there are in fact dozens of temples in the region.  We started with Angkor Thom which contained within it Bayon. We loved how we were able to climb on and around this centuries-old temple without being forced to a specific path.  This was the same for most of the temples as we were free to roam as we chose.  We took a route around Baphuon and Phimeanakis; over the Terrace of the Elephants and Terrace of the Leper King.  All beautifully carved. 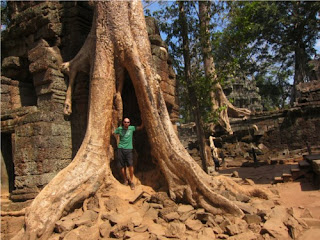 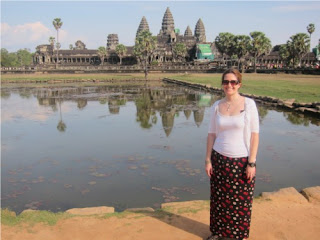 By the time we had met back up with our driver it was around lunch time and we were getting exhausted from the heat.  Having some ice cream and creatively carved pineapple gave us the energy to drive on to our next stop, Ta Prohm.  Unlike most temples in the area, this one has been left in much the same condition as it was found.  Used in scenes from the original Tomb Raider movie it includes several trees growing in and around the temple ruins. Once we finished there we went to a small restaurant near the Angkor Wat temple for a true lunch and to cool off.  After lunch we had some time to explore Angkor Wat in all its glory.  It is a massive temple with well preserved carvings on several of the walls. 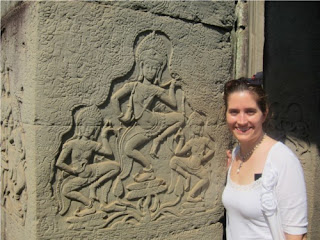 We finished our tour of the temples with a short hike up a nearby hill to Phnom Bakheng.  While a small temple where only 100 people are allowed in at a time, the real draw is being able to see Angkor Wat and the sunset.  When we were allowed up to the temple we found people sitting all over it waiting for the sun to set in what seemed like another hour.  We decided we didn't want to wait and went back down passing hundreds of people trekking up the hill for the experience.  We were glad we left.  It was better to avoid the avoid the crowds and head back into town where we found a Mexican restaurant with delicious margaritas. 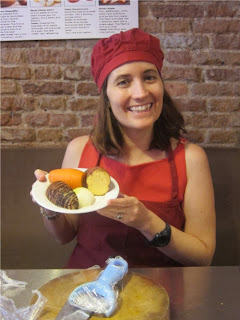 The next morning (Thursday), after breakfast, we went downtown for a cooking course.  We started with a trip through the chaotic old market where a fish jumped off one of the tables at Erin.  There was a large selection of courses which we could choose to make, though Erin and I decided to make the same things.  It worked out well since there was only one chef/instructor for six of us.  While we enjoyed the class the lack of an extra instructor made it go a little late.  Once we had our creations for lunch we walked over to a complex of artisan shops.  Angkor Artisans was set up to give Cambodians with disabilities a place to learn and create art using different medium.  On a short tour we got to see people who were deaf and mute make silk screen paintings, lacquer items, copper engraving, stone carvings, and wood carvings. 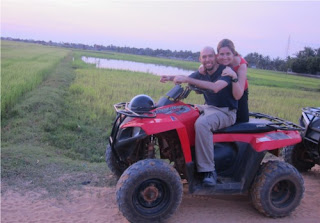 Later that afternoon we got to ride ATV's out through the nearby countryside to see the sunset.  It was fun to ride through the fields and see all the kids waving as we went by.  We finished the night back downtown at an Italian restaurant tucked back in a small alleyway. 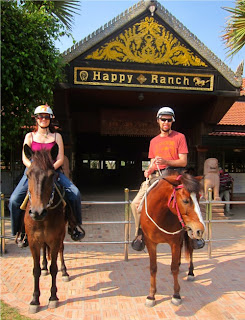 Earlier in the week, as I was making reservations for a horse ride, Erin reminded me of the many hours she had spent with horses growing up.  Feeling like I had a similar experience growing up we were looking forward to our two-hour ride Friday morning.  After resolving an issue caused by my inaccurate conversion from pounds to kilograms we were soon on our way with our guide.  It was just the three of us as we rode through the surrounding countryside, first at a walk, but then later trotting and cantering several times.  It was nice to have a bit more control of our horses than a standard trail ride would allow, but we had some problems when we tried crossing between two rice paddies and the guides horse refused to cross some quick-moving water.  With little space between the paddies to ride on we had a hard time turning the three horses around.  We eventually made it back to the stables safely, but we were also very sore.  After having lunch downtown we returned to our room to nap and recover.  That night we were picked up by one of the owners of a traditional Cambodian restaurant for dinner.  As we rode he explained how proud he was to be able to maintain this family-run business.  Tasting the food and some rice-wine mojitos from his brother in a very romantic atmosphere was wonderful. 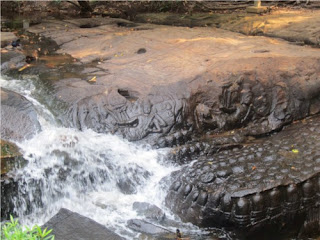 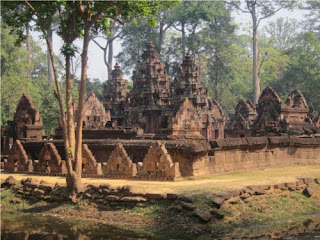 The last day of our stay was Erin's birthday and so it was appropriate to take a car out to Banteay Srei, also known as citadel of the woman, or citadel of beauty.  But first, we went a bit farther to Kbal Spean, also known as "The River of a Thousand Lingas".  As it was early in the morning we were the first to arrive at the river and had the trail to ourselves, a guide, and a few friendly dogs. The guide showed us the many carvings in the river rocks mostly consisting of "lingas" which are a phallic symbol of Hindu god Shiva.  Back at Banteay Srei we struggled with the crowds to see the many intricate carvings.  Before too long though we had to get back to our hotel and checkout.


After two short flights and a long layover in Ho Chi Minh City (Saigon) we were back home.  It was a great trip and we were glad to have experienced such amazing sights first-hand. We would definitely recommend both Vietnam and Cambodia to anyone traveling in the area.   I feel especially lucky to have such a wonderful traveling partner to enjoy these places with and I'm looking forward to our future travels together.
Posted by Unknown at 9:37 PM No comments: