Well, it's been a slow month for us as we've gotten back to work and used to the routine of life here. Things have been pretty good aside from a few weekend markets behind our building that play annoying music on repeat. Erin is as busy as ever with classes and the drama club while my work has been less demanding. It's given me more of an opportunity to focus on what we'll be doing when we return to the US this summer.


Last weekend we had planned a full itinerary in Taipei. While the rain and the cold kept us from doing some of it we still had a good time. We left Saturday late in the morning and after resolving my mistake at the hotel we were on our way to lunch at Ding Tai Fung, our favorite soup-dumpling place. In the same mall we were able to do some shopping for some western food that is hard to find in Kaohsiung. With the rain coming down we skipped our plan of a hike and instead went to see a movie. We finished the night with some drinks and bar food at Gordon Birsch.


The next morning we slept in before having a delicious breakfast at our hotel. We were relaxing back in our room when we started to notice some of the hangers shaking.  Turns out there had been an earthquake on the southern part of the island.  It had been strong enough to feel in Taipei, but hadn't done any more damage then a little bit of grout falling out of our shower tiles back at home. 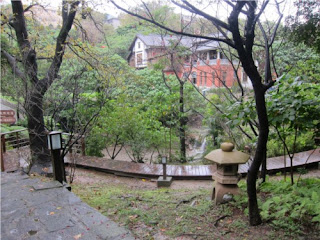 We soon made our way out by the MRT to Beitou in the north part of the city. There we found a nice landscape and wonderful park based on existing hot springs. After walking up some narrow streets we came to the spa recommended in our book only to find it demolished. Nearby though we found another place called "Poetry in the Woods". Though it looked nice, the price and the setup made it not for us. After more looking we finally found a spa that we liked. Thankfully it had stopped raining and we were able to enjoy the hot springs for a little while before moving on. 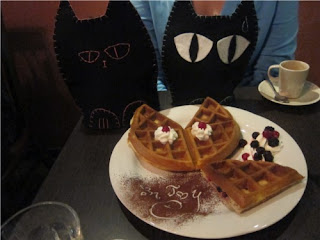 Beitou was a nice setting and we would like to return one of these weekends, but we were on a mission to get some hot chocolate. In Danshui, a city/suburb by the coast there is a place called "In Joy Chocolate" that serves the best hot chocolates we've ever had. They treat their hot chocolate like wine with a care for the varieties found from different parts of the world. The result is a pot of hot chocolate that we were willing to brave the renewed rain to get. They also make some good waffles and have a cozy cat-themed place.


We finally made our way back down to Kaohsiung after a ride on the train Sunday night. We had apparently brought the cold down with us, but it was okay. The hot springs and hot chocolate had warmed us up and gave us the needed reprieve from our routine.
Posted by Unknown at 8:51 PM