Julian Alps and the Karst 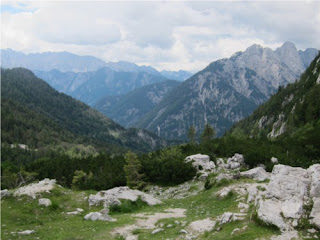 After spending three great days around Lake Bled, it was time for Erin and I to move on. Taking advice from Rick Steves we got in our rental car and left for a drive through the Julian Alps.  Named after Julius Caesar who founded the region at the base of the mountains they' form beautiful vistas with their limestone peaks.  After driving up twisting switchbacks we stopped at the top of a pass inhabited by sheep. 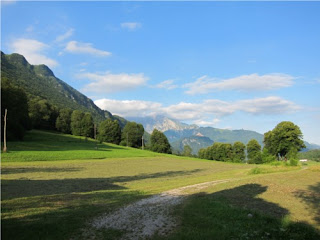 We then took many more switchbacks down the other side stopping to view turquoise waters and old suspension bridges.  The end of our drive led us to Hisa Franko in Kobarid where we would have dinner and stay the night.  The fancy meal with vegetables and herbs from their own garden paired deliciously with locally made organic wine.  It was a great place to celebrate our third anniversary.

The next day was our caves and castles day.  We started by driving down to the Postojna Cave.  While the area was very touristy it was hard to get over how cool it was to ride a train through the cave.  It was like a ride at Disneyland but longer and without the ups and downs.  Then, after riding the train there was still so much cave to walk and explore.  After walking through the cave and learning about it.for about an hour we got back on the train and went back to the surface.  See video from the train ride here and imagine 15-20 minutes of this. 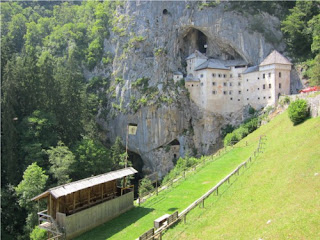 After the cave we took a short drive up the rode to Predjama Castle.  Built into the face of a cliff it is an impressive structure.  We did not go inside though as we had more to see.  After an hour drive South we came to another cave system.  The Skocjan Caves are less touristy then our previous caves, but also incredibly impressive.  While there was no train, there was an underground river and a much more comprehensive guide.  With a slew of bats and other creatures we were not allowed to take photos.  After a long hike we came to the end of the cave and were soon back on the road. 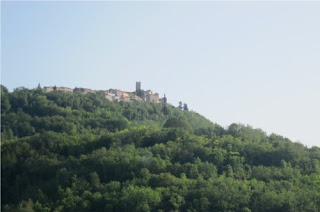 After a brief stop for immigration we drove down in to Croatia and our final castle for the day.  Perched high on a hill was the castle and town of Motovun, Croatia.  We had made arrangements to spend the night in the castle...we just had to get up there.  After a long day of driving and cave walking the steep drive up the narrow cobblestone lane was a final test.  With pedestrians and cars coming down the ancient lane we successfully made it up without hitting anything.  It had been an exciting and very tiring day.
Posted by Unknown at 10:19 PM