Our first stop in Slovenia was the capital, Ljubljana (pronounced: lyoo-BLYAH-nah).  Unfortunately, trains were not running between Italy and Slovenia so we had to get a taxi to take us over the border to a train station in the city of Sezana, Slovenia.  From there we took a pair of trains to the capital and found our hotel. 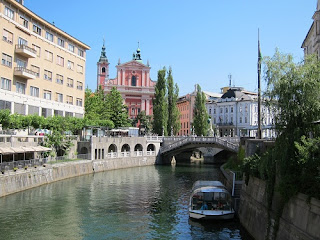 Ljubljana is a beautiful city and we were surprised at the lack of people out on the Saturday night we arrived.  We took a walk around the old town before finding a nice place to eat with tables out on one of the old streets.

The next day we went back to the old town for a tour around.  A knowledgeable and nice art history professor walked our group around explaining the various architecture and sights.  Slovenia has an interesting history at the crossroads of Western and Eastern Europe.  We saw evidence of it's different memberships including the Roman empire, the Hapsburgs Monarchy, and Yugoslavia. 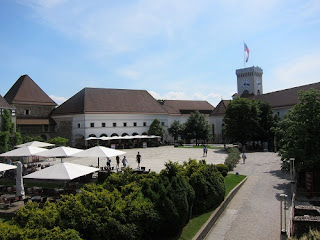 After the tour we walked up to the city's castle overlooking the city.  There was a place to get lunch there after which we strolled around the ramparts.

It was very nice to see Ljubljana.  It seemed like a clean city with friendly people.  It didn't seem to have much life to it though.  Maybe because we were wandering around on a Sunday we didn't see as many people, or maybe we've gotten used to the density of people in Asian cities.  In any case, after 24 hours we were ready to move on to our next place: Lake Bled.
Posted by Unknown at 12:03 PM