Car From a Broker

For the last two weeks I've been riding my motorcycle to work every day. After searching for the best route I settled on a scenic drive by the foothills that takes about an hour. It's better than the more direct route that has enough traffic to make my commute even longer. Riding for two hours each day though has been tiring. Now as the mornings have grown colder and the winds have picked up I decided it was time to get a car. I had researched cars before starting work, but I ran out of time to actually get one.

Then Erin showed me the car broker she and her parents had used in the past. I called up Phil Martin at H.M. Motors on Tuesday afternoon and told him what I was looking for and my price range. A few hours later he called back with a car that fit what I was looking for: a 2009 Suburu Impreza. I took a day to look over the details and called him back on Wednesday. By Thursday we had arranged a test drive after work and I thought it felt and sounded good. So on Saturday Erin drove me over so I could fill out the paper work, pay the down payment, and drive home with the car.

I was very impressed at the ease and efficiency Phil gave me through the experience. I might have been able to get a better deal if I had negotiated with dealers or private owners, but it would have taken far longer. I would recommend anyone looking for a car to contact Phil. 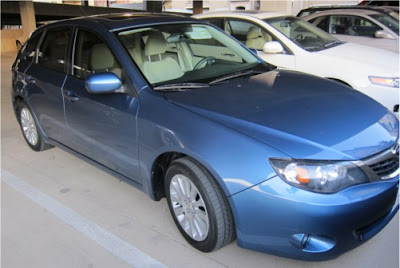