A few weeks ago the trees in the mountains were well on their way to changing their colors.  In anticipation of this Erin and I had booked tickets on a train ride in Leadville to see the trees.  We drove up on Saturday after a week with some of the first heavy storms in Colorado.  The leaves on the trees we saw on our way up to Leadville were beautiful; with mountainsides covered in yellow aspens.  We stopped briefly at Silverthorne for some brunch before making our way in to Leadville for our afternoon train ride. 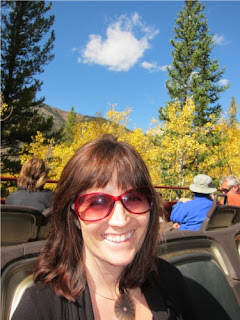 The train was a standard gauge railroad with many open and closed seating cars.  We found seats in the open section and were soon on our way.  Unfortunately, after the previous week's storm many of the leaves had fallen off.  Still, it was nice to hear about the history of Leadville and enjoy the ride on a beautifully sunny day.  The train went from the town up towards the mine and back again in about three hours.  After the ride we hung out in Leadville a little longer to get some pictures of the aspens before heading back down to Denver.

That night, we met up with our friends, Brian and Cassie, who were in town for two weeks.  Brian is stationed in South Korea and has been living there with Cassie for the past year, so it was really good to see them.  I had also seen Brian earlier in the week for a guys-night-out which was also nice.  When we saw the two of them on Saturday night we went out to the Rodizio Grill which is a Brazilian steakhouse.  I enjoyed the wide variety of meat that the servers were bringing around to our table (including tri-tip which I had previously only been able to get back in Tulare).  After dinner we all went up to the Peaks Lounge in the Hyatt Regency.  It was nice to sit around, enjoy some drinks, and catch up with our friends.

By now there are still a few trees with Fall colors down here in Denver, but they are mostly bare.  We already had a little bit of snow a few weeks ago.  Fortunately Erin and I were able to take a ride out on the motorcycle yesterday as we went for lunch in Golden.  However, I feel it may be the last time this we ride this year.  At least there's snowboarding season to look forward to in a few months.
Posted by Unknown at 8:00 PM No comments: