In September Erin and I got go out to Chicago last month to take part in her brother's wedding.  We flew out Thursday night meeting up at the airport since we were coming from work.  After a quick bite to eat we were on our uneventful flight to Midway Airport.  Once there we found a cab and made our way to the hotel in Peoria.  We got in pretty late, but the hotel staff were nice and had our room ready.

The next day we got up and had breakfast before meeting up with Erin's parents.  Since no one else was in yet we took a walk around some woods not too far from where we were staying.  After that things got busy.  First Erin's sister and brother-in-law showed up with their baby, Nora.  Then we went out to lunch at a Pita Inn, Erin's favorite restaurant in the area.  We met up with the engaged couple.  They were busy with some last minute details, but we got to catch up a little before heading out to help with the preparations. 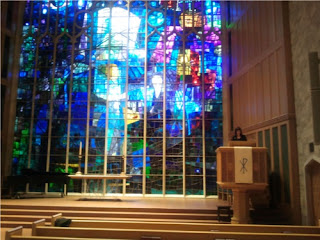 Our next stop was at the church for the rehearsal.  The wedding was to be held in the church on the Northwest University campus since Andrew and Sara (the betrothed) both went there.  It was also where Erin had gone to school.  The rehearsal went smoothly with everyone working out when and where to speak and stand.

Before long we were heading out again to help with more details (getting last-minute items at Walmart, making sure the rehearsal dinner place was ready, etc.).

That night we all went out to a nice Italian restaurant for the rehearsal dinner.  It was nice to meet all the family members.  Erin and I talked mainly with the relatives on her and Andrew's side of the family.  As was true with most of the weekend, most of the attention was aimed at baby Nora who is now walking.  Erin appreciated how Nora would walk from the table her Mom was sitting at and walk over to the table we were sitting at to be with Erin and Nora's grandmother, Susie.  Erin and I finished the night talking back at the bar of the hotel before going to bed. 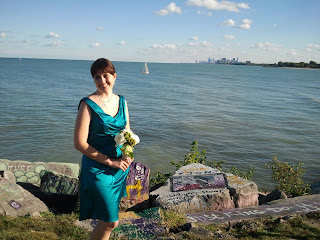 On Saturday there was more frantic preparations as people were coming and going.  We made it out to the church all dressed up for pictures.  It was soon time for the ceremony and with a little help from everyone it went beautifully.  After the ceremony we went out with the bridal party to take some more pictures around the Northwestern campus.  Fortunately the rain from the previous day had passed and we were treated to sunny skies.  However, it was still on the cool side and the two of us were realizing how accustomed we had become to Taiwan's heat.

After pictures we made our way to the reception a short drive away.  Along with the usual reception staples of dinner and drinks we were treated to a candy buffet and a photo booth.  Erin and I went through the photo booth several times with a variety of funny hats and other costume pieces.  As the night danced on we began to get tired and took our leave as we returned to the hotel.

The next day we got to spend a little bit more time with the newlyweds as they joined us for lunch near where they live.  At a Korean fried chicken place we recounted the events of the weekend and talked about their plans for their honeymoon in Hawaii.  They were then very nice to give us a ride back to the airport for our flight back to Colorado.  It was a very nice weekend and we are very happy for the two of them.  We look forward to hearing all about their trip when they get back.
Posted by Unknown at 9:38 AM