Back in November, as my birthday was approaching I had decided what I wanted most was a snow weekend up in the mountains.  Only problem was that there wouldn't be enough snow in the mountains in November, so Erin and I postponed until two weeks ago.  Since it was a three-day weekend we were able to take our time and enjoy the week away from home. 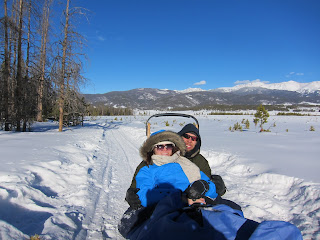 We got up, had breakfast, and packed Saturday morning.  On our way up the mountains we stopped in Idaho Springs for lunch.  Traffic wasn't bad, and in no time we were at our destination of Winter Park.  Our first activity that Erin had found was riding in a dog sled.  It was a beautiful sunny day for it, though a little windy.  After filling out the waiver we were taken back to where they were preparing the sleds.  There were about 85 dogs in a few large pens and it was very noisy when the drivers came out.  They bundled us in to one of the sleds and then hooked up nine dogs to it.  Before long we were of sledding through the snow.  The dogs seemed to enjoy running and it was quiet enough for us to ask the driver questions.  It was a very interesting experience.  After about an hour or so of sledding we returned to the pens and got to play with the dogs a little while they were being put back in their pens. 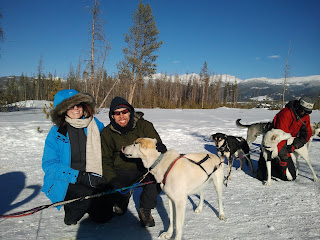 We next headed to our hotel to check in and relax for a little bit.  Our plan was to go to an early dinner and then go out for a horse-drawn sleigh ride.  We walked over to a sushi place for dinner, but halfway through dinner we realized that we wouldn't make it to the sleigh ride in time, so we postponed that for the next night.  With bellies full of sushi and sake we walked back to our hotel to sleep.

On Sunday we got up and had breakfast at the hotel before heading to the slopes.  It took a while, but eventually we found where to park, go rental gear for Erin, got lift tickets, and got on the chair lift.  We shared the chair with a nice older couple that were very friendly.  We skied and boarded for a while, but it was hard to get into a good groove and we kept losing each other.  We eventually stopped for lunch and relaxed for a little bit.  When you spend so much time and effort to get on the mountain its hard not to feel the need to do as many runs as possible, so we were soon back on the slopes.  The wind had picked back up by that time though and we were getting tired, so we called it a day.

We found a nice cajun-style place for dinner and this time we were able to get there early enough to have time to make it out to the sleigh ride.  It was dark by the time we made it out there and it turned out that the other people to go on the ride didn't show up.  So it was just us and the driver on a large sleigh pulled by two very large horses (I think they said they were Haflinger/Percheron).  They took us out under the starlit night to a place where someone had prepared a fire and some hot chocolate.  It was nice to enjoy the warmth there and roast some marshmallows before heading back to the stable.

On Monday we got up at a leisurely pace and made our way back down the mountains to avoid the traffic.  It was a somewhat exhausting weekend, but nice all the same.  All in all, in was a great birthday treat.
Posted by Unknown at 9:12 AM No comments: