I haven't posted anything for quite a while because I feel like there hasn't been much to write about.  There were some very nice dinners with wonderful people, to be sure, but I just couldn't muster the energy to write about them.  Now that the weather has warmed up again though I feel like Erin and I have gotten out more and I once again have something to write about. 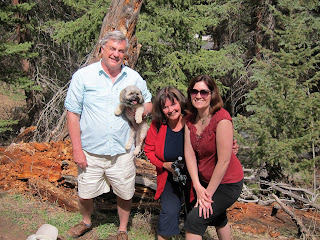 About a week ago we had a busy weekend.  We started it off with dinner and a movie Friday night at the Alamo Drafthouse.  The nice thing about this place is that you can order before the movie starts and then the server will bring it out for you to enjoy during dinner.  The drinks are pretty good too.  We went to see "The Great Gatsby" since Erin had been teaching it in her classes recently.  It was a nice rendition of the book highlighting the class rivalry and the hubris of trying to repeat the past.  On Saturday we had brunch with Erin's parents after I picked up my motorcycle from the shop.  The shop had repaired my back tire and it was so nice to be able to get back out and ride around for a little bit.
Then on Sunday we celebrated Mother's Day with a hike above Evergreen with Erin's parents before going out to dinner at Duo with them.  It was a very nice, if somewhat exhausting weekend.

This weekend ended up being just as exhausting.  On Saturday morning I went with my friend for a morning of climbing in Golden.  We have been practicing in one of the climbing gyms in Boulder throughout the winter and have been able to climb outside now that the weather's warmer.  Golden has a lot of exciting climbs that are within our range, but we need to get there early before they get too crowded.  I always come away from these pretty worn out too.  But then Saturday night I was up and ready as we went out for dinner with our supper club.  This month we went to "The Wooden Table" which had some very delicious (if expensive) food.  It was good to catch up with everyone before things got really busy over the summer. 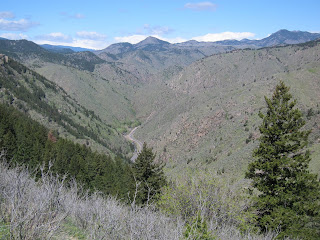 On Sunday Erin and I started early getting on the motorcycle, getting some breakfast and then heading up to Golden.  We had found a hike up on Lookout Mountain above the town at Windy Saddle.  It was quite windy and fairly rocky, but the views were amazing looking down on Golden and Denver plus out West to the Continental Divide.  As a city we would like to move to this summer I was encouraged that such nice hikes were so close to town.  Before we got too far though we were heading back down to have brunch with my aunt and uncle in Littleton.  We had a delicious meal as we caught up.  The rest of the day had to be devoted to chores and preparing for the upcoming week so it was nice to finally get some rest Sunday night.  It's also been nice to finally get out and enjoy the warmer weather.
Posted by Unknown at 9:22 PM No comments: