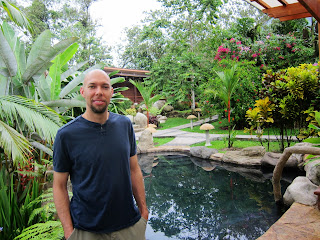 Erin and I recently returned from Costa Rica where we had a wonderful time.  We started out with a direct flight from Denver to San Jose leaving at midnight and arriving at 5am.  As such, we didn't get much sleep, but we had arranged to rent a car that morning.  After getting the car we drove down the road to a Denny's for breakfast where Erin read about some of the scams that some rental car places use.  With that in mind it was very troubling when we started to have car trouble when we left Denny's.  Fortunately we were able to get the car back to the rental place and they got us a new one without problems.  We then drove our new car to La Fortuna (about 3 hours away) in Arenal where we checked in to our bungalow and proceeded to take a nap.  In what would become a routine for the rest of our stay in Arenal we spent the afternoon in the hotel's hot springs drinking Costa Rican caipirinhas before going to the hotel restaurant for casado with tilapia. 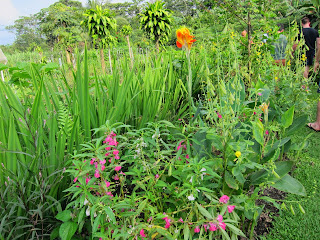 The following day, after we had rested, we had arranged for a white-water rafting trip.  The guides picked us up in the morning and took us out to the river where we were given gear and directions.  We were on the Balsa river starting off in a section with Class III - IV rapids.  Our group of two rafts and two kayakers taking pictures was soon on its way.  We quickly realized the need for instructions on shifting our weight left or right to the high side of the boat as the guides directed us into and through large currents and eddies.  The trip was tiring and wet, but very exciting and in a beautiful canyon.  As we pulled in to land we thought we were finishing, but were only stopping for a break with fresh pineapple and watermelon.  Back in the boats we continued down through Class II and III rapids until we finally got out of the river.  Exhausted, we were taken to an organic farm for a delicious lunch.  They then showed us around the farm ending with a demonstration of getting cane juice from sugar cane and a drink of fermented sugar cane juice.  All-in-all it was the most fun organized activity we did on our trip. 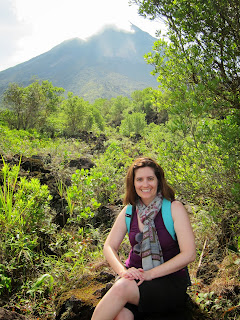 The next day we were up early for a canyoning trip.  The main draws for canyoning were a series of rappels down waterfalls.  While these were exciting, they were also very tame and methodical.  There was a guide at both the top and the bottom that could stop you at any point.  This reduced the feeling of control.  It also seemed like they were just going through the motions, giving everyone the same experience, making sure everyone stopped at a certain point so they got in the waterfall.  When it was done they too took us to lunch, but it wasn't as good.  After our great experience the day before we were a little disappointed.  For the afternoon we went to downtown La Fortuna for an ice cream and a walk around the center square.

For our last day in Arenal we walked in the volcano park with some wonderful views of Arenal volcano.  Though the volcano is dormant people are not allowed to get too close.  The park contained lava flows, jungle flora and fauna, and some nice views of our next destination: Lake Arenal.  We soon checked out of our first hotel and started our drive around the lake to our next hotel overlooking the lake.  We had lunch out on a scenic, windy peninsula of the lake and took a short walk around.  The countryside is nice, but the lake seemed very under-developed since we didn't see a single boat out on it or any piers.  We finished the day off by reading out on the balcony of our room and then walking next door to a delicious dinner.

It was all very peaceful and relaxing; and a nice mid-point for our trip.
Posted by Unknown at 9:33 PM