This last month has been busy with finding a new place and getting a puppy, but before I get into that I'd like to finish writing about our trip to Costa Rica. 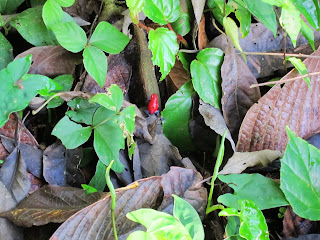 By the middle of our trip Erin and I were loving Costa Rica.  We finished our stay on Lake Arenal with a walk around the property.  I was struck by how the lodging was so well maintained, but then just a few steps away we seemed to be deep in the jungle.  We found several of these poisonous blue-jeans frogs as we walked along with numerous birds and insects.

Before long we were off driving around the lake to Monteverde.  Along the way we stopped at a local brewery started by surfers.  Monteverde, we had learned, was founded by Quakers leaving the US and the draft.  As we drove over rough roads and rolling green hills it certainly seemed remote.  It took several hours driving over unpaved roads to finally get to where we were staying and we were so happy for some paved roads when we got there.  Our arrival got even better as the proprietor welcomed us to her home with drinks and a beautiful view of the clouds and tree-tops.  She was very welcoming and showed how much effort she had put in to her place as she showed us around the various tree-house rooms.  By happy hour we had settled in and enjoyed another drink as the sun set behind the clouds. 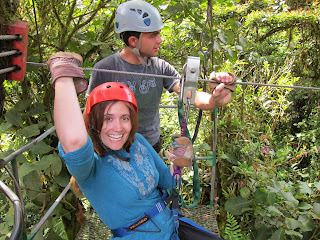 The next morning, after breakfast, we entered the national park to see the flora and fauna up close. We started with a zip-line tour through the canopy.  It was very fun and exciting with several long lines high above the jungle floor.  For some added excitement at the end there was a Tarzan swing where we jumped/fell from a platform and swung on some ropes. 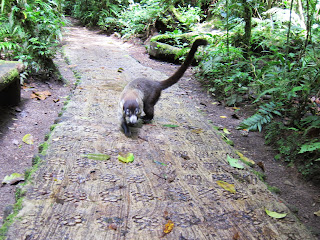 After the zip-line tour we joined up with a guide to show us around the park.  He was very knowledgeable and enthusiastic about all the animals and plants.  He found for us a Quetzal, a beautiful bird found in Central America, along with a troop of monkeys and a coati that came up to us looking for some food.  I don't think we would have seen half the things we did or understood what we were looking at without the guide and his telescope.  We finished our trip to the park with a stay in their hummingbird garden.  I don't think I've ever seen so many hummingbirds all in one place.  There were several feeders placed out for them and they were so used to people that we could walk right up to the feeders and the birds would continue to buzz in and drink with us there. 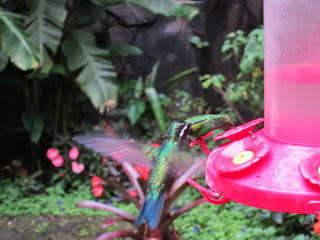 After a long day of zipping through the forest and looking at all the animals you might think we were done.  Instead we had signed up for a night walk in the jungle with another guide.  We saw animals at night that we hadn't seen during the day including sleeping birds, snakes, and a tarantula.  The best part was standing in a clearing with our flashlights off as fireflies blinked around us and the stars shined above.  It might have been the crowning moment of the trip.

The last stop on our trip was the beach at Playa Samara.  Through a combination of being tired and not being big beach people we didn't do too much there. 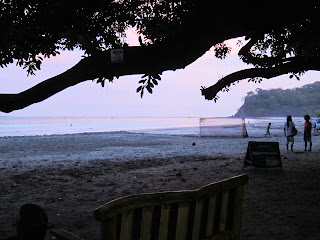 We had tried to go out on a boat, but we weren't able to arrange it.  We ended up walking on the beach a bit and enjoying some good local seafood.  It was nice to sit out by the beach and enjoy some drinks, but before long we were ready to go.

We drove back to San Jose where we stayed for a night by the airport and flew out early the next morning.  It was a wonderful trip and a nice vacation.  Even as we were leaving we were thinking about what we would see the next time we were able to make it down here.